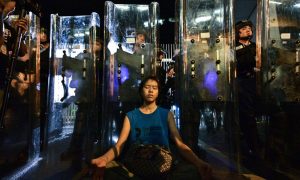 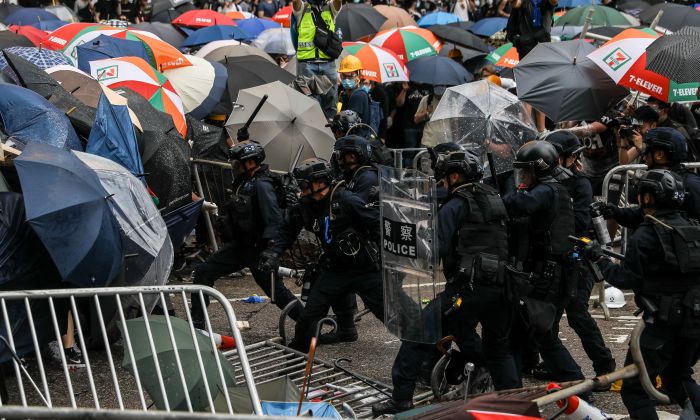 Police clash with protesters during a rally against a controversial extradition law proposal outside the government headquarters in Hong Kong on June 12, 2019. (Dale De La Rey/AFP/Getty Images)
Social Issues

Amnesty International has reviewed and confirmed videographic evidence that police in Hong Kong had employed “unnecessary and excessive use of force” to disperse protesters on June 12 who opposed a controversial extradition bill, according to a report released by the U.S.-based human rights group on June 21.

Hong Kong citizens have for the past two weeks taken to the streets to protest proposed amendments to the city’s extradition laws that would allow criminal suspects to be extradited to and trialed in mainland China, where critics say, an opaque judicial system could punish individuals on trumped-up charges.

On June 12, swarms of demonstrators poured onto the roads surrounding the city’s Legislative Council (LegCo) building, blocking lawmakers from entering the building to convene a planned meeting to debate the bill. As the LegCo is dominated by the pro-Beijing camp, it was expected that the bill would move forward.

In the afternoon, as some protesters tried to enter the building, clashes occurred with police. Officers in riot gear fired tear gas, bean bags, and rubber bullets at the unarmed crowd, causing 81 civilian injuries.

Photos and footage captured from that day have since widely circulated online. Some show police officers repeatedly firing tear gas at retreating protesters, beating unarmed demonstrators with batons after they were subdued on the ground, and firing rubber bullets into concentrated crowds.

The police response has since sparked widespread public outrage.

“Rubber bullets, pepper spray or batons should never be used for dispersal or directed at peaceful demonstrators or bystanders, but only used against persons engaged in violence,” Amnesty International stated in its report, which outlined 14 examples of verified footage from June 12 that show “police violence.”

The group said the “unlawful police actions” could have posed “a serious risk of severe injury, or even death, to protesters [on June 12].”

The nonprofit organization also created an interactive map detailing the time and location of each of the 14 instances.

Civil groups in Hong Kong have called for the establishment of an independent investigative committee to scrutinize the police use of force on June 12 and hold accountable those police officers who have committed violence against peaceful demonstrators.

Local groups are also collecting videographic evidence from eyewitnesses in order to seek redress with the city government.

A total of 32 protesters were arrested from the June 12 protest, according to Hong Kong police. Five were arrested on suspicion of rioting, 10 on suspicion of violent crime-related offenses, and 17 for other charges including failure to display ID, loitering, and possession of items that could be used for illegal activities.

Eight cases have since been dropped, though it is unclear what charges those cases involved. According to the city’s penal code, the rioting charge is punishable by up to 10 years in prison.

After an international outcry, on June 15, the city’s top official Carrie Lam announced that the bill would be suspended indefinitely. But protesters have said it is not enough, and demand the bill’s full withdrawal, as well as for arrested protesters to not be charged; the police’s previous characterization of protests as “riots” to be retracted; police brutality to be investigated; and Lam to step down.

On June 21, after the city government did not respond to protesters’ demands by their proposed deadline, thousands surrounded the police headquarters buildings and other government buildings in what they called “elevated action.” As of early morning on June 22, scores of protesters were still at the scene.

Civil Human Rights Front, the organizer behind two recent anti-extradition bill marches that drew millions, is gearing up for another demonstration on Wednesday, June 26 ahead of the G20 Summit in Japan, to continue demanding for the bill’s full withdrawal.

In a June 21 Facebook post, the group urged Hong Kong people to rally again to “deal another blow to Carrie Lam” in the run-up to the international event taking place on June 28, in order to increase pressure on the city’s government.