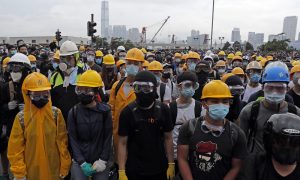 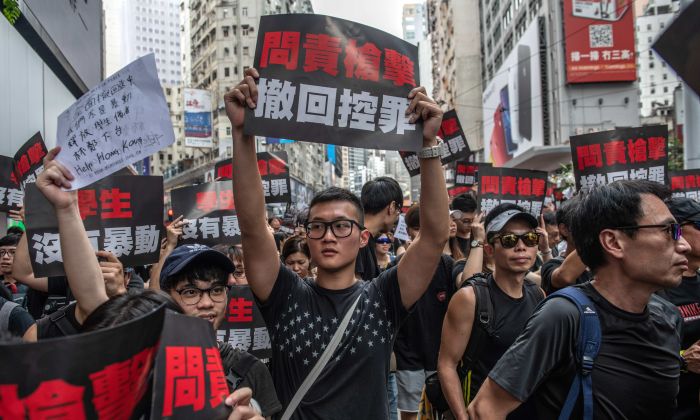 Protesters demand that the authorities entirely withdraw the now-suspended extradition bill and retract its characterization of the demonstrations as a “riot” on June 16, 2019 in Hong Kong. (Carl Court/Getty Images)
China Society

Hong Kong Police Commissioner Stephen Lo has backed down from earlier characterizations of protests against a controversial extradition bill as “a riot,” clarifying in comments on June 17 evening that he was referring to only specific individuals suspected of violent behaviors.

On June 12, tens of thousands of Hong Kongers gathered near the city’s legislature to protest the bill, which would allow any country, including mainland China, to seek extradition of criminal suspects. In the afternoon, Hong Kong police tried to disperse the crowd by firing tear gas, rubber bullets, and bean bags at protesters, resulting in over 80 civilian injuries.

In a statement released later that day, the city’s police department had described the demonstrations as a “riot.” The following day, Lo held a press conference in which he repeated the characterization. Protesters have since expressed outrage at the label and demanded that the government retract its statement.

“What I said on the day [of the June 13 press conference] was actually referring to certain individuals, whose behaviors are related to breaching anti-rioting laws,” Lo said on Monday evening. “Other peaceful demonstrators do not have to worry about riot charges as long as they did not commit violence.”

Lo also confirmed the arrests of 32 individuals since last Wednesday: five on suspicion of rioting, 10 on suspicion of violent crime-related offenses, and 17 for other charges including failure to display ID, loitering, and possession of items that could be used for illegal activities.

The offense of “rioting” in Hong Kong, as determined by the Public Order Ordinance, is punishable by imprisonment, for a maximum of 10 years.

His words were met with backlash from protesters against the extradition bill.

Civil Human Rights Front (CHRF), a pro-democracy group in Hong Kong that has organized the city’s largest protests against the bill, released a statement several hours later in response to Lo.

“Lo has attempted to divide the protesters into ‘the five rioters’ versus ‘the rest of them.’ This absolutely will not be accepted by the CHRF,” according to the statement. “It did not retract the categorization of the demonstrations as a riot, and it completely failed to respond to the people’s demand.”

It also condemned Lo’s failure to respond to accusations about the police’s excessive use of force to quell demonstrations on June 12, demanding that Lo step down.