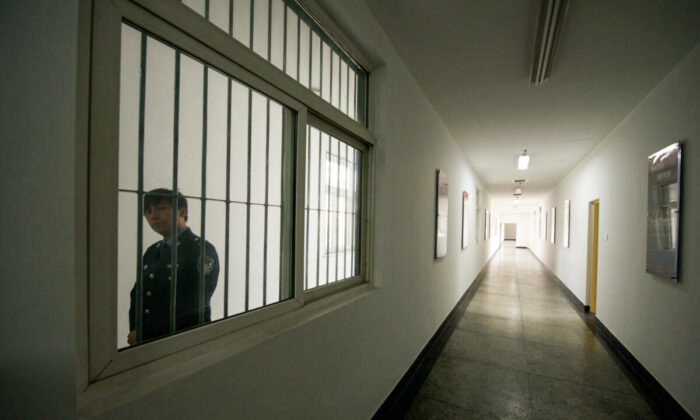 A guard looks through the window of a hallway inside the No.1 Detention Center during a government guided tour in Beijing on October 25, 2012. The rare visit to the facility, which has capacity for 1,000 inmates, was opened to the foreign media as Beijing prepares for the 18th Congress of the Communist Party of China. AFP PHOTO / Ed Jones (Photo credit should read Ed Jones/AFP via Getty Images)
Chinese Regime

Sun Lijun, 52, was arrested on suspicion of accepting bribes during the time when he was a party committee member and vice minister at China’s Ministry of Public Security, the country’s top prosecutor announced in a statement on Nov. 5.

Sun became the ministry’s vice minister in March 2018, before he was stripped of his post in May 2020, a month after he was placed under the party’s internal investigation for corruption.

The statement added that the arrest was made following the conclusion of an investigation by the National Supervisory Commission, the regime’s anti-corruption watchdog. Without providing any more details, the statement concluded by saying that the case against Sun was “being further processed.”

The brief statement leaves open the question of whether the Chinese authorities have also investigated Sun for crimes outside of his political career at the ministry. Sun was once a deputy director at the 610 Office, the regime’s Gestapo-like agency that is notorious for human rights violations against Falun Gong adherents.

More details about Sun’s alleged crimes were announced back in September, when the regime’s Central Commission for Discipline Inspection expelled Sun from the Communist Party following its investigation.

The commission accused Sun of having “hugely inflated political ambitions” and “spreading political rumors.” He had formed “factions and gangs” within the party, and created his own “interest group,” in order to build up his own power. His action “severely undermined the unity of the party,” the commission stated.

Moreover, the commission said Sun had lived a “decadent life,” which “traded power for money and sex,” and accepted “huge amounts of bribes.”

Sun’s arrest comes at a politically sensitive time in China, as the party’s Central Committee gathers for a four-day meeting called the Sixth Plenum starting from Nov. 8. One of the functions of the Central Committee is choosing CCP members to sit on the 25-member Politburo, the most powerful decision-making body in China.

Zhao’s criticism took place on Oct. 16, when during a party meeting he said that those in “Sun Lijun’s political faction” must be “thoroughly investigated” and “severely punished.”

Such criticism within the CCP indicated that Sun’s downfall, while very much about his own wrongdoing, was also to fulfill a political agenda, U.S.-based China affairs commentator Li Linyi told the Chinese-language Epoch Times in October.

According to Li, Chinese leader Xi Jinping could be using Sun’s case to “build up his prestige” ahead of the 20th National People’s Congress next year.

In autumn 2022, CCP officials will gather to hold a twice-a-decade party congress, during which a new group of top leaders will be chosen. Xi is seeking an unprecedented third five-year term in office after becoming paramount leader in 2012.

During his political career, Sun was also once the personal aide to Meng Jiangzhu, who headed the PLAC from 2012 to 2017.

In October 2017, U.S.-based nonprofit, the World Organization to Investigate the Persecution of Falun Gong (WOIPFG), named Meng as a perpetrator of crimes against Falun Gong adherents.

Falun Gong, also known as Falun Dafa, is a spiritual practice with meditative exercises and moral teachings. Both the 610 Office and the PLAC have been instrumental in carrying out the regime’s persecution campaign against Falun Gong since 1999.

Now, more than two decades later, millions have been detained inside prisons, labor camps, and other facilities in China, with hundreds of thousands tortured while incarcerated, according to the Falun Dafa Information Center. Thousands have been confirmed dead as a result of abuse and torture while in detention.