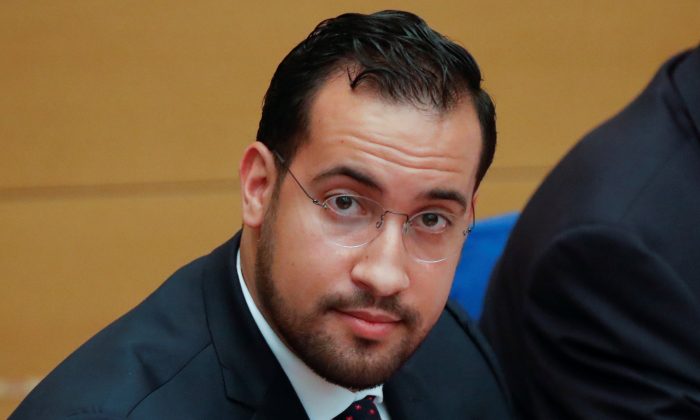 Former Macron Bodyguard in Spotlight Over Consultancy Work in Africa

PARIS—A sacked security aide to French President Emmanuel Macron who was at the center of a scandal that shook the government this summer is under fresh scrutiny over the nature of his recent work as a consultant.

The presidency confirmed Dec. 27 that it had written to Alexandre Benalla in the past few days demanding more details about business trips to several African countries and telling him not to claim any links to the government.

The Benalla scandal marked a turning point for Macron’s presidency and popularity from which he has found it hard to recover as other problems have piled up, including a stream of anti-government marches and riots by “yellow vest” protesters.

The affair erupted in July after a video surfaced of Benalla beating a May Day protester. Macron fired him, but was accused by political rivals of acting too slowly and being out of touch.

Macron’s cabinet chief, Patrick Strzoda, asked the former bodyguard to provide “all relevant information” about his consultancy work, according to extracts from a letter published in the newspaper Le Monde.

He also asked Benalla to adhere “strictly to protocol on secrecy … linked to your former responsibilities”.

The president’s office confirmed the content of the letter.

Benalla made a trip to Chad several weeks before Macron visited Dec. 22 and 23, raising questions about whether he still had links to the president.

Benalla, who is subject to a judicial investigation, has been quoted by several French news sites in recent days as saying he was “shocked and scandalized” by suggestions that he had acted inappropriately.

“Today, I’m a consultant. I’ve been to around 10 countries in Africa,” he told Le Monde. “I’m not going to stop doing what I’m doing.”

The news site Mediapart said Benalla was still traveling on a diplomatic passport received as part of his former job. The Foreign Ministry said Dec.27 that it asked Benalla in July to hand over two diplomatic passports, and was considering further steps.

Macron’s approval ratings fell below 20 percent in early December, even as he responded to the protests with an array of measures, including dropping an unpopular fuel tax and raising the minimum wage.