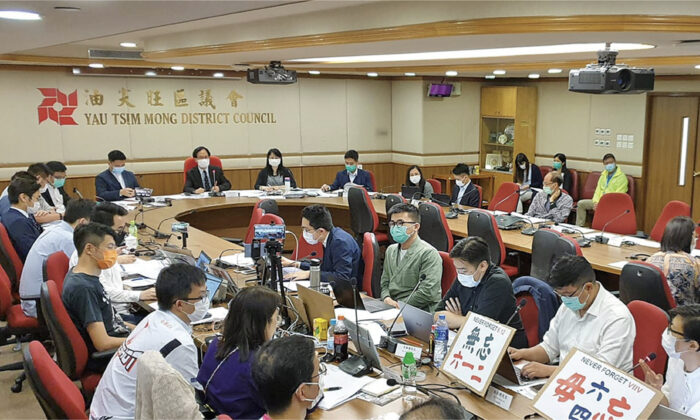 The current District Councils in Hong Kong expire at the end of 2023. Chief Executive (CE) John Lee Ka-chiu first responded to whether the District Councils should be retained or abolished when he attended the Legislative Council Q&A session on July 6. “If necessary, a decision should be made, and a plan should be set up before the next election.” He added that he would examine the “inefficacy, damage, and problems” of the current system, implying that District Council elections may become a thing of the past.

The Epoch Times interviewed three former District Councillors. All of them expect the government to abolish all elected District Council seats and replace all members of the district administrative advisory bodies with appointees instead.

All to be Decided Before the Next Election

On July 6, John Lee attended his first Legislative Council Q&A session. A Member of the Election Committee for the Legislative Council, Andrew Lam Siu-lo, asked, “What specific plans and timetables are there for the reform and arrangement of the local administration?” Lee replied, “A real decision and plan must be in place before the next election of the District Councils, if any are needed. We will examine all our past experiences, the problems that had occurred in the failure or even destruction of the entire system in the past because we must comply with the requirements of the Basic Law, and see how Hong Kong can form an effective regional administration.”

Lee did not explain what he meant by the “inefficacy, damage, and problems” of the current system. The Epoch Times reporter looked through the government’s 2021 promotional pamphlet to “improve” the electoral system and found one photo in the Shatin District Council chamber. There was a “Lennon Wall,” also some pro-democracy District Councillors holding demonstrative banners such as “Carrie Lam Step Down,” “Accountability for the Shooting,” and the likes.

Some parts of the text in that promotional pamphlet had such statements: “Radical elements entered the Hong Kong political circle via the then electoral system and used their status as public officials to sabotage and paralyze the administration’s governance. After gaining a majority in the District Council elections, they then planned an illegal ‘primary election’ to plot for other ambitions such as the ’35+’ (an attempt to win more than 35 seats in the Legislative Council elections in 2020).”

The same pamphlet also claimed that the District Council elections spawned, politicized and extremist chaos, causing this formerly “non-governmental regional organization” to deviate from its original nature and orientation. It was on the verge of failure, causing many complaints from residents in the different districts.

In 2019, during the anti-extradition movement, the democrats and non-establishment factions won the District Council elections by a considerable margin. From that victory, they captured a total of 388 seats and gained control of 17 (out of 18) district councils. However, in 2021, the government intentionally let it be known that the “DQ” (disqualification) process of the councillors will be implemented first by requiring them to swear an oath of allegiance. Then even after taking the oath, there would still be the chance of being disqualified. When that happened, the respective councillors would be liable for refunding nearly one million dollars in salary and allowances.

Consequently, there was a wave of resignations upfront. Adding those disqualified after swearing the oath, 333 District Councillors’ seats have remained vacant until today. The net effect is that there are fifty-two non-establishment District Councillors against ninety-three from the pro-establishment faction, resulting in the democrats losing their overall advantage.

All Former Councillors Interviewed Are Pessimistic

Former Kwai Tsing District Councillor Daniel Kwok Tsz-kin speculated in an interview with The Epoch Times that John Lee might refer to last year’s so-called “improvement” of the electoral system and abolish the system of electing District Council members altogether.

Kwok believes that the resignation of the pro-democracy District Councillors and the subsequent DQ process had taken place almost a year ago. Since then, he observed that the channel for the government to obtain opinions of the people through the District Councils had nearly disappeared completely, and the local administration had lost all its effective media and public interaction. If it continues and extends, more ineffective policies and measures will be implemented, which will intensify public grievances and create what can be seen as a vicious circle.

He hopes that the people of Hong Kong will become more united. Although the civic groups had been dissolved, the citizens could still form their neighborhood organizations, working together to help each other. Please keep it in good shape, and be able to take good care of everyone around them.

In an interview with The Epoch Times, former Wong Tai Sin District Councillor Carmen Lau Ka-man pointed out that after the resignation of District Councillors en masse and the “DQ” process in 2021, the government had not held any by-elections, which reflects the government’s desire to shake up the District Councils. So, she would not be surprised by the abolition of elected district councils in the end. But she was still “very disappointed” because Hong Kong would have no real public representatives anymore.

Lau noticed that since 2021 when there was a lack of public opinion representatives to deal with regional policies, some citizens spontaneously formed their organizations to look after regional issues and tried “self-help.”

Lam Siu-pan, a former member of the Yau Tsim Mong District Council who was a member of the Fire Safety Committee, made his analysis in an interview with The Epoch Times that the District Council was a regional advisory body established by the British Hong Kong government after the riots in 1967 to promote “consultative democracy.” The prime intention was to collect local public opinions and turn social movements on the streets into orderly parliamentary behaviors. It was an attempt to channel public grievances and maintain social stability.

He pointed out that, on the contrary, the current political atmosphere has changed drastically. The Hong Kong government is implementing a policy of high-pressed governance. It does not pay attention to public opinions during policy implementation. At the same time, it also prohibits demonstrations, “DQ” duly elected candidates, and sends opposition figures to prison instead of bringing them to become part of the system. Furthermore, they view overthrowing the system set up by the British Hong Kong government as one form of showing political loyalty.