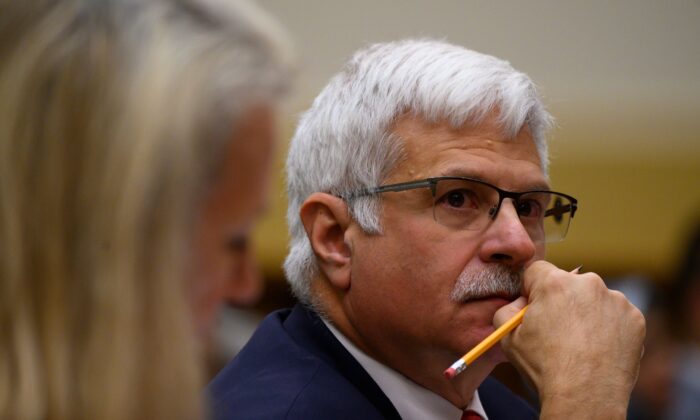 Former U.S. Assistant Secretary of State for Democracy, Human Rights, and Labor, Robert Destro, looks on during an Asia, the Pacific and Nonproliferation Subcommittee hearing on "Human Rights in South Asia: Views from the State Department and the Region" on Capitol Hill in Washington, on Oct. 22, 2019. (Andrew Caballero-Reynolds/AFP via Getty Images)
US-China Relations

Robert Destro, former assistant Secretary of State for Democracy, Human Rights, and Labor, has called for sanctions on Americans who are involved with China’s slave labor.

Destro pointed to anti-human trafficking and forced labor laws such as the Uyghur Forced Labor Prevention Act (UFLPA), which President Joe Biden signed into law in December of 2021 and which went into effect in June. The law bans imports from China’s Xinjiang region unless the importer can prove that the products were not produced using forced labor.

“What it looks like is putting teeth in and getting some enforcement of” laws like the UFLPA, Destro said.

“We also have to start meaningfully doing the same thing with respect to sanctions. But now the teeth of the sanctions have to be on Americans who do business with these regimes,” Destro added.

Consistency Needed in Dealing With Abuses

“What about the atrocities that are being attributed to President Xi and his unified state-private partnership?” he asked during the interview on Sept. 16.

“We need to be consistent in the way we apply economic pressure,” Destro stressed.

Destro said that when serving his term under the Trump administration, dealing with slave labor was one of the big issues he encountered.

“When you say to somebody, why don’t we just throttle back a little bit and not buy goods that are created by slave labor … People look at you like you’re crazy,” he recalled.

“’Well, what do you mean, we can’t stop doing that? We want to turn our country great.’ To which my response is: ‘No. What you’re doing is, you’re turning the country red with the blood of the people who are being victimized by what’s going on in China.’”

BRICS Alliance Could Mean ‘A World of Hurt’

Destro also sounded the alarm about the threat that the forthcoming BRICS alliance—an acronym for Brazil, Russia, India, China, and South Africa—poses to the United States.

“That’s a bloc that is formidable in its nature. It will change the power equation across the world in ways that don’t help us,” he said.

Destro believes “President Putin and President Xi are interested in replacing the dollar as the world’s reserve currency.”

At a summit on June 23, BRICS members reportedly called for cross-border payment in BRICS currencies, a move to challenge the U.S. dollar.

Regarding the move, Destro said, “I don’t think our politicians or the country as a whole [have] any idea of what a world of hurt that will cause here in the United States.”