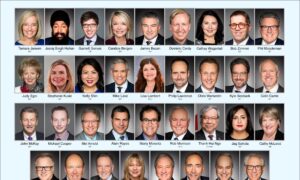 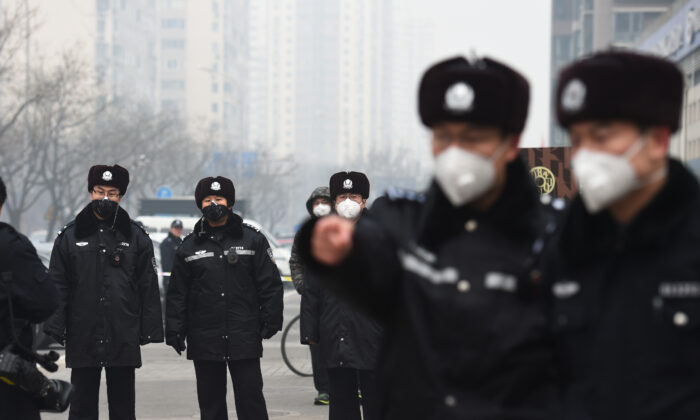 Police wear masks as they stand guard outside the No. 2 Intermediate People's Court where human rights lawyer Pu Zhiqiang was being sentenced in Beijing on Dec. 22, 2015. (Greg Baker/AFP via Getty Images)
Chinese Regime

Peng Bo, who once worked for a secretive agency that has carried out decades of atrocities as an arm of the Chinese Communist Party, has been charged with corruption.

China’s top procuratorate, the state prosecutor for the communist regime, announced the charges against Peng on Oct. 11. However, the announcement didn’t mention the human rights violations he might have committed while acting as deputy director of the extralegal “610 Office.”

The state prosecutor said Peng was charged for crimes of illegally accepting “large amounts of bribery” and censoring the internet for the benefit of certain companies. These crimes were committed over the course of his long political career since 2006, during which he also held several different positions in China’s cyberspace sector, including deputy director of China’s internet regulator Cyberspace Administration of China (CAC).

Peng was a CAC deputy director from 2012 to 2015. Then he took the position of deputy director of the 610 Office and was a team leader in managing “cyber public opinion” in the communist regime’s top legal body, the Central Political and Legal Affairs Commission.

His political career appeared to end in 2018. That year, he began working as a professor at his alma mater, Peking University.

Peng was placed under Party investigation in March before he was stripped of his Party membership five months later.

The 610 Office, named after the date of its founding, was established on June 10, 1999, by former Chinese leader Jiang Zemin for the purpose of implementing the Chinese regime’s persecution of Falun Gong. The office would go on to function in a manner akin to Nazi Germany’s Gestapo, with powers overriding China’s courts and police.

Falun Gong, also known as Falun Dafa, is a spiritual practice with meditative exercises and moral teachings based on the principles of truthfulness, compassion, and tolerance. The practice became very popular by 1999, with official estimates putting the number of adherents in China between 70 million and 100 million.

Jiang, who saw the practice’s popularity as a threat to the survival of the communist regime, launched on July 20, 1999, a nationwide campaign to persecute Falun Gong adherents. Since then, millions have been detained inside prisons, labor camps, and other facilities in China, with hundreds of thousands tortured while incarcerated, according to the Falun Dafa Information Center.

The 610 Office has been directly responsible for many cases of torture and death, according to Minghui.org, a U.S.-based website that tracks the regime’s persecution of Falun Gong.

For example, in December 2004, Chen Xiuchong, who was 74 and living in southern China’s Xiamen city, was beaten to death in her home by officials from the local 610 Office, according to Minghui.

In 2016, Minghui documented how the regional 610 Office in Dehui, Jilin Province, was subjecting local Falun Gong adherents to brainwashing sessions in an effort to force them to renounce their beliefs.

One former 610 Office official has been placed under U.S. sanctions. In May, Yu Hui, who once headed the regional 610 Office in the city of Chengdu, Sichuan Province, was sanctioned by the State Department for his role in “gross violations of human rights, namely the arbitrary detention of Falun Gong practitioners for their spiritual beliefs.”

Peng is the second official from the 610 Office purged by the Chinese regime this month.

Fu Zhenghua, former head of the 610 Office and former Chinese justice minister, was placed under investigation on Oct. 2. The Party’s organ for policing corruption, the Central Commission for Discipline Inspection, hinted that the investigation was related to corruption crimes, but it didn’t say whether the commission was also looking at Fu’s possible involvement in human rights violations.

The World Organization to Investigate the Persecution of Falun Gong, a U.S.-based nonprofit, has named Fu as a perpetrator of crimes against Falun Gong adherents.