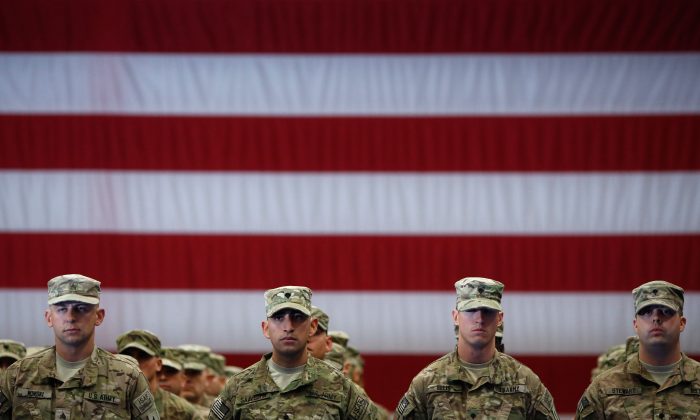 Soldiers from the U.S. Army's 3rd Brigade Combat Team during a homecoming ceremony in the Natcher Physical Fitness Center on Fort Knox in a file photo. (Luke Sharrett/Getty Images)
US

Robert Hale says the budgetary turmoil, 2010-2014, resulted in a waste of resources, mission degradation, harm to employee morale, and a 'colossal waste of time.'
By Gary Feuerberg

WASHINGTON—When Congress returns to work after Labor Day, it will have three weeks to agree to a new budget for fiscal year 2016, which begins Oct. 1. Based on recent years, that task alone would be daunting, but is made even more so with the uproar over Planned Parenthood, with many Republicans determined to defund it. In this tumultuous environment, a government shutdown can’t be ruled out.

Robert Hale knows first-hand the costs in time and money of not being able to agree on a budget. As the principal adviser to three secretaries of defense on all budgetary and fiscal matters, including the development of the Defense Department’s annual budget of more than $600 billion, Hale was intimately involved in the budgetary planning and negotiations serving as the comptroller and chief financial officer from 2009 to 2014. In a new paper, “Budgetary turmoil at DOD from 2010 to 2014: A personal and professional journey,” Hale documents the losses from the turmoil and his own personal frustrations.

Hale is currently a fellow at the consulting firm Booz Allen Hamilton.

Published last month, the paper is timely. Even if a shutdown is averted this month, Hale shows the high costs in planning for it and the detrimental effects it can have on the military’s mission. He hopes that others will learn from his account and change the way they approach the budgetary process.

The budgetary turmoil also had adverse effects at federal agencies other than DOD, but Hale said he would confine his remarks to DOD, where he worked as comptroller under the secretary of defense and his deputy.

Hale spoke on Sept. 2 at the Brookings Institution, where he described the “colossal waste of time,” money, and negative impacts on mission and morale at DOD resulting from the “constant budget turmoil.” in the years he was comptroller. He had some advice, too, for Congress and the president on what must be done to avoid the harms caused by budgetary turmoil.

“As soon as possible … the president and Congress need to reach a two-year budget agreement that provides reasonable budgetary certainty,” he said. Later, after the 2016 election, an agreement is needed to end the current threats of “sequester cuts, government shutdowns, and budget delays.”

The Sequester and the Shutdown of 2013

Hale said two heavy blows struck in 2013 that he and his staff had to contend with: the sequester and the shutdown. The Budget Control Act of 2011 compelled that about $37 billion in defense funding be “sequestered” for FY 2013, which ended September 30. The law required that the cut be applied equally for about 2,500 line items.

Soon after that was complied with, the government shut down Oct. 1 because Congress and the president did not reach an agreement on a budget for FY 2014. All DOD civilian employees, other than those “excepted,” had to be placed on furlough.

The sequester and shutdown of 2013 received the most public attention, but Hale said there was much more the public didn’t hear about.

“Since 2010 DOD planned to shut down its operations no fewer than five times while I served as comptroller. Three of those events resulted in useless work but only limited disruption,” he wrote. One of those scares happened in August 2013, when Congress argued over raising the debt ceiling. If it had been breached, DOD would not have been forced to shut down its operations, but it might not have been able to pay all of its bills.

Planning for two of the five crises went to completion. The shutdown in 2011 was averted only a few hours before the April 8 deadline and the Oct. 1 shutdown actually occurred.

The planning actions were enormously disruptive, he said, because guidance must be determined and constantly reviewed regarding which activities can continue during the shutdown. “Civilians who are to be furloughed … must be identified by commanders and staff and then notified by individual letters, leading understandably to a barrage of questions and much employee angst.”

Hale also states that “substantial amounts of time” was wasted in preparing two budget plans for FY 013 and again for FY 2014. Imagine how demoralizing it is to work on two budgets under different assumptions, when even a single budget for the Pentagon requires at great deal of work.

CRs: Poor Replacement for a Budget

Hale holds a deep antipathy toward CRs (continuing resolutions) that Congress forced on DOD twice in the past five years. When no budget deal can be agreed upon by the Congress and the president, the CR is used to avoid a shutdown. In other years, CRs lasted for two or three months, but the two imposed on DOD were for at least six months. CRs typically mandate for DOD to operate at prior-year funding levels, which in 2013 was often distributed in the ‘wrong’ categories.

“[CRs] are a poor way to manage any organization, especially a massive and complex one like DOD,” Hale wrote.

The DOD made the risky decision to not plan for the sequestration during the fall of 2012, when the sequester cuts were due to go into effect Jan. 1, expecting that Congress and the president would finally agree on a budget that would avoid the sequester cuts. Because DOD did not sequester itself and make cuts at the beginning of FY 2013, deeper cuts were necessary in the latter part of the year. The result was that the Department was compelled to make 30 percent cuts in day-to-day operation funding during the second half of FY 2013.

[CRs] are a poor way to manage any organization, especially a massive and complex one like DOD.
— Robert Hale, DOD comptroller, 2009-2014

Hale admitted that DOD overstated the adverse impact of the sequestration in order to persuade Congress to reach a deal. He wrote that military leaders said it would be “ruinous,” like a government shutdown.

The sequester resulted in the halt to almost all facility maintenance projects. “Maintenance depots laid off more than 7,500 temporary and term workers, hurting people and slowing planned maintenance.”

“In April 2013 the Air Force stopped all training flying at 17 of its 62 operational squadrons and reduced flying at 10 others.”

The Army had scheduled 14 brigade combat teams to rotate through the service’s combat training centers. The Army canceled plans of seven. The result is that those seven brigades were “less than fully combat ready had they been required to deploy.” This training loss is permanent for some individuals and cannot be made up later by rescheduling. These individuals may have moved on to another unit or another position without the knowledge and benefit from the training that Army leadership considers essential for combat readiness.

Had a major war occurred … training cutbacks would have left the military less able to respond than the country had a right to expect.

The Navy had to delay for four months the 2013 deployment to the Persian Gulf of the USS Truman and the carrier’s associated strike group was canceled. “In this case, sequestration resulted in failure to meet a military mission,” he wrote.

Hale wrote that he believed that sequester cuts harmed military readiness and DOD’s mission. “Had a major war occurred … training cutbacks would have left the military less able to respond than the country had a right to expect,” he wrote.

Cuts to training, deployments, and maintenance were still not near enough to meet the legally mandated sequestration cuts, and so the Department resorted to unpaid furloughs of the civilian employees. (Furloughing military personnel would accomplish nothing, because the law requires that they get paid until separation from service.)

About 640,000 civilian employees were furloughed beginning in July 2013 and ending for most DOD employees in August, with most affected employees forced to take off one day a week. DOD was able to hold the number of unpaid furlough days to six.

Not long after the sequester furloughs were over, “emergency furloughs” from the shutdown followed on Oct. 1. About 350,000 DOD civilians were affected and furloughed 16 days. The furloughed workers ended up getting paid anyway as Congress realized that they were not at fault. “Their pay for the days on furlough amounted to about $400 million and constituted pure waste,” Hale wrote.

The most enduring consequence of the budgetary turmoil according to Hale, was the decline of the morale of civilian employees. An index of government worker morale created by Partnership for Public Service had been trending upward between 2003 and 2010. But after 2010, the index fell sharply. Based on questions asked last year, the index is down 12 percent from the 2010 level, which Hale says is the lowest point since it was created.

Hale wrote that a former DOD leader told him that “many DOD civilian employees feel they are just pawns in a chess match.”