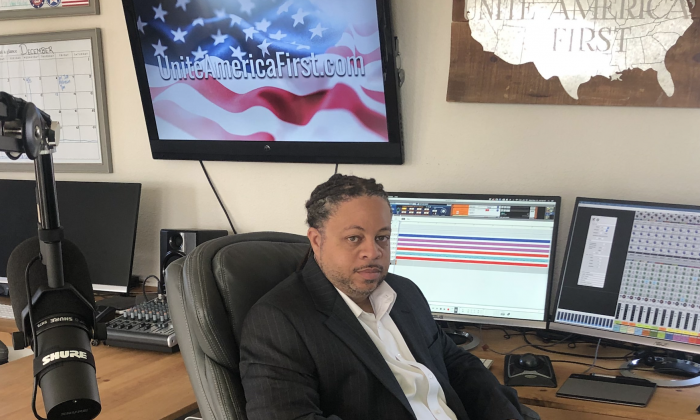 Will Johnson in his studio. (Nathan Su/The Epoch Times)
US News

SACRAMENTO, Calif.—While many self-proclaimed left-wing, socialist candidates have joined the race to be the Democratic Party’s nominee in the 2020 presidential election, a former party member who walked away from the Democrats in 2015 says this year, he’s running away from the party.

Will Johnson, an African-American radio host, shared his #WalkAway story and the reasons behind it in an interview with The Epoch Times.

Last year, Johnson attended the 2018 #WalkAway march in Washington, where he gave a speech about his reasons for leaving the Democratic Party.

During the Oct. 27, 2018, march, Johnson said to the crowd: “I went to the White House yesterday with President Trump. What a wonderful thing! There [were] between 300 and 400 black conservatives there, and I’ve never seen so many Trump hats—MAGA hats—in one place before. It was so awesome, and the media doesn’t want to tell anybody, because they don’t want you to know what is happening across this nation.”

He said that people on the left continue to attack those who don’t think or believe the same leftist ideologies, and the media believes that Americans will believe any story told in the news.

But “the American people are waking up,” said Johnson.

Before moving to California, Johnson lived in Arkansas, Oklahoma, and Germany. Although he said he has always believed in God, he used to consider himself a Democrat, despite not supporting every Democratic policy or ideology.

He said that one belief he used to have was that Republicans are against abortion for the sake of having more children be born, to then be sent off to war.

Looking back on his past beliefs, Johnson said, “I was trying to justify reasons not to like the Republican Party, which was completely crazy.”

After he got married, he and his wife moved from Arkansas to California, where he started to realize he no longer wanted to be a Democrat.

Johnson was still a Democrat when President Barack Obama took office, and he voted for Obama twice, he said.

“I think the thing that really turned me around was [when Obama] came out and [started] celebrating the whole homosexual community thing. People were getting married in the courthouse, and he was getting their phone numbers and calling them before they can even step foot off the steps of the courthouse, congratulating them,” he said.

“Then he painted [with colored lights] the White House with the rainbow colors in celebration of the LGBTQ+ community. And me being a Christian, it really tugged on me,” he said.

While Johnson says that he has never been vocally or physically negative against people of the LGBTQ+ community, he says he felt that covering the White House, a federal building, in those colored lights was directly disrespectful to God.

Over time, he began to understand the Democrats’ view on God and religion, and how that agenda goes against the values of God.

“And then I started doing research on how the Democratic Party is the Party of the KKK. And, at first, I was torn with it, because here I am; all my life I was told to support the Democrats because the Democrats are black people, minorities, brown people,” Johnson said. “But it’s not true. [Democrats] have this perception that they want people to believe that they are [for the people], but they’re not.”

Johnson said he continued to research the Jim Crow laws, U.S. history, policies, and more, and realized that the Jim Crow laws and the KKK were originally formed by the Democratic Party of the time.

“It’s just unbelievable; all this information is here, and the Democrats have changed what history is. Then, it dawned on me—that’s part of the reason why they’re trying to take down these statues. Because these statues represent that time of slavery and the Civil War, the majority of these statues, if not all of them, [are] Democrat statues,” he said.

Statues depicting pieces of U.S. history, such as the Early Days statue that used to stand in the United Nations plaza across the street from San Francisco City Hall, have been slowly removed from public spaces across the nation.

“Me personally, as a black person, I say we should leave them there to remind us of the history, so that way, we don’t repeat it. And I truly believe the Democrats have an agenda to change what history really was so that we will just repeat it again,” said Johnson.

He believes the agenda is now to attack white people, attempting to portray white people as rich elites, to encourage society to attack and go against them.

Other things Johnson couldn’t support about the Democratic Party included their prison system policies and their attempted vote to remove mentions of God in oaths.

About President Donald Trump, Johnson says that Trump “talks like us.”