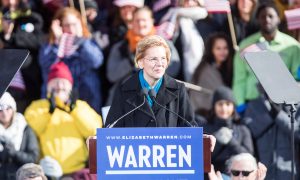 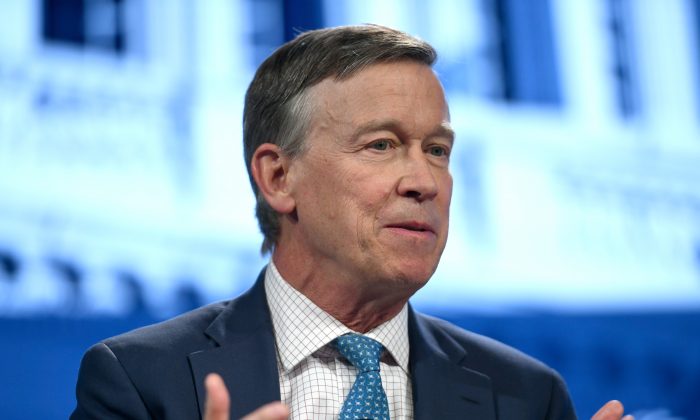 Former Colorado Gov. John Hickenlooper, a Democrat, announced March 4 he is entering the 2020 presidential race—pointing to his experience as an entrepreneur, mayor, and governor.

Speaking in a campaign video, Hickenlooper pledged to bring “the progressive change that Washington has failed to deliver.” He didn’t mention President Donald Trump by name in the two-minute-long video.

“I’m running for president because we’re facing a crisis that threatens everything we stand for,” Hickenlooper said in the video. “I’ve stood up to my fair share of bullies. Standing tall when it really matters is one of the things that really drives me.”

Hickenlooper touted his experiences as both the mayor of Denver and the governor of Colorado. He mentioned how he steered the state out of a series of emergencies, including drought, fires, floods, recession, and the mass shooting in Aurora, where 12 people were killed in a movie theater.

“I’m running for president because we need dreamers in Washington, but we also need to get things done,” Hickenlooper said.

In an interview on ABC’s “Good Morning America,” Hickenlooper said he’s the person who “can bring people together on the other side and actually get stuff done.”

“John Hickenlooper is the latest tax-and-spend liberal to join the race,” RNC Communications Director Michael Ahrens said on Twitter. “But according to Hickenlooper, he’s actually ‘a lot more progressive’ than his far-left opponents. In a primary dominated by socialist policies like the $93 trillion ‘Green New Deal,’ that puts him way outside the mainstream.”

Hickenlooper polled between zero and 1 percent in early surveys of the Democratic field, a sign of low name recognition, according to FiveThirtyEight. Only 22 percent of Democratic respondents even have an opinion of him.

As the latest Democrat hoping to snag the nomination, Hickenlooper joins a crowded field of at least a dozen other presidential contenders, including self-described socialist Bernie Sanders. Several other prominent Democratic candidates are backing Sanders’s socialist policies such as the “Green New Deal” and “Medicare for All.”