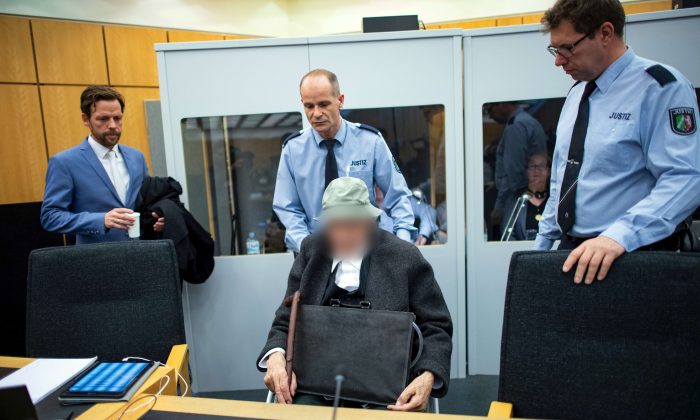 A 94-year-old German man accused of assisting in the murder of hundreds of people at a concentration camp during World War Two, pictured in court in Muenster, Germany, on Nov. 13, 2018. (Guido Kirchner/Pool via Reuters/File Photo)
Europe

MUENSTER, Germany—A 94-year-old German man accused of assisting in the murder of hundreds of people at a concentration camp during World War Two told a court on Nov. 13 he had never been a Nazi and he was not indifferent to the suffering of inmates.

The accused, who cannot be named for legal reasons, was a guard in the SS paramilitary wing of Hitler’s Nazis and could face a prison sentence of up to 10 years if convicted.

“I want to say clearly that I am not a Nazi, never was and in the little time that I still have to live, will never be,” the defendant said in a statement read to the court by his attorney, Andreas Tinkl.

Too frail to read the statement himself, the defendant came to court in a wheelchair and spoke only a few words during the hearing.

Prosecutors argue he facilitated killings between 1942 and 1944, when he served in the Stutthof camp, near what is now the Polish city of Gdansk. About 65,000 people, including many Jews, were murdered or died there, according to the museum’s website.

‘I Lived In Fear’

Reading the defendant’s statement to the court, the lawyer said the Stutthof inmates were “in an atrocious state and the conditions were very bad.”

“Even then I was very ashamed,” he said. “I would like to make clear that I was not indifferent to the fate of the prisoners. I had problems coming to terms with it,” he said, acknowledging, however, that he had never expressed criticism.

“I lived in fear that one day the Nazis would turn on me,” he said through his lawyer, adding he wanted to get away from the camp. After a couple of years he was moved to the front.

Equipped with earphones and following the proceedings attentively, the defendant responded with a hoarse “yes” when asked to confirm that the statement was his.

A lawyer for the joint plaintiffs, Onur Oezata, said evidence given by the defendant was not plausible as documents proved he had joined the SS voluntarily and had volunteered for concentration camp work.

“He has remained very tight-lipped when asked about certain relevant things like the systematic killings and acts of homicide and the many different ways of murdering people that were carried out at Stutthof,” said Oezata.

He added, “The concentration camps of the Nazi system were built on the fact that they employed highly ideological men who saw themselves as working in the service of their beliefs. They didn’t want people there who had been forced into it. It had to be people who wanted to be there.”

The trial, likely to be one of the last of its kind, opened last week in the northwestern city of Muenster and is scheduled to continue into next year.

In recent years, some other former SS camp guards have been convicted but died either before the conviction was legally binding or before they had to go behind bars.

The 2011 conviction of John Demjanjuk, a guard at Sobibor death camp, was the first time no proof of a specific crime was needed to convict a defendant. It led to more prosecutions against lower-ranking individuals in the Nazi death machine.

The suspect in Muenster, who turns 95 next week, is being tried in a youth court because he was under 21 at the time of the suspected crimes. Court sessions have been limited to a maximum of two hours per day because of his physical frailty.