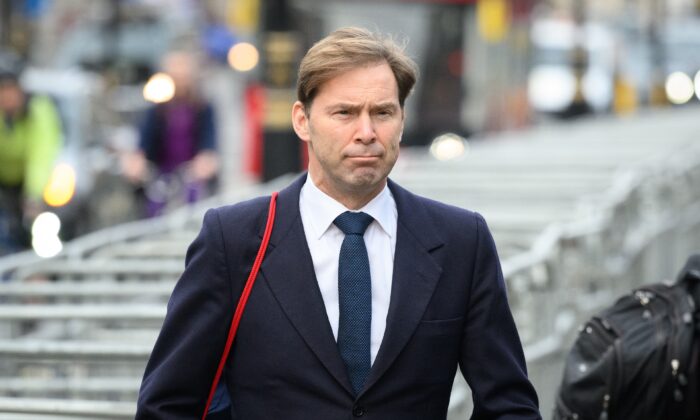 A former British Conservative minister has sparked controversy after he argued the UK should “upgrade Brexit” by rejoining the European Union’s single market.

Writing in The House magazine on Wednesday, Tobias Ellwood, the Tory MP for Bournemouth East, argued that his proposed Brexit “course corrections” would ease the cost of living crisis and make the political impasse in Northern Ireland go away.

Pointing to the UK’s export shrinkage to the E.U., Ellwood said it would be a “dereliction of duty” not to access how well Brexit has worked “given the gargantuan economic challenges ahead.”

Citing a recent YouGov poll that suggested that nearly half of the people (49 percent) thought Brexit had gone badly and only 17 percent considered it successful, he argued that there’s now an appetite for change.

The senior Tory advocated for “the Norway model,” meaning the UK would join the European Economic Area (EEA) to gain and provide access to the internal market’s free movement of goods, persons, services, and capital, but stay out of the EU’s common agriculture and fisheries policies, the customs union, the common trade policy, the common foreign and security policy, justice and home affairs or the monetary union.

Ellwood said the EEA membership was not on the ballot of the 2016 Brexit referendum, which asked the question of whether the UK should remain in the E.U.

Ellwood said he appreciates that the “understandable reservations about the free movement of people” needs addressing, but said the problem is “not insurmountable.”

He also recognised that joining the EEA “would require acceptance of some E.U. regulations,” but argued “one common standard” may be better than two for UK industry.

Invoking Winston Churchill and Margaret Thatcher, Ellwood urged his conservative colleagues to remember the former prime ministers both “endorsed this model, with the view that the potential economic benefits outweigh the drawbacks.”

Ellwood also warned that mishandling the Northern Ireland Protocol could trigger a trade war with the E.U. and risk vexing the United States.

In conclusion, he submitted, “If joining the single market (with conditions) results in strengthening our economy, easing the cost-of-living crisis, settling the Irish problem at a stroke, and promoting our European credentials as we take an ever greater lead in Ukraine, would it not be churlish to face this reality?”

But his argument was met with forceful rebuttals from his Conservative colleagues on Twitter.

Arguing that rejoining the single market would open up the UK’s borders, puts the E.U. in charge, and inhibit the UK’s ability to make new trade deals, House of Commons Foreign Affairs Committee Chairman Tom Tugendhat wrote, “We need a deal British people control not foreign laws with no say. Let’s plan for the future and stop looking back. This decision is made.”

Harper acknowledged that the Brexit agreement regarding Northern Ireland has led to “issues,” but insisted that those issues are being dealt with.

Treasury minister Simon Clarke said he was “pleased to reassure Mr. Ellwood” that the UK would not be rejoining the single market, as this would “extinguish half the freedoms that make Brexit so important.”

Former Brexit minister Lord Frost appeared to suggest that Ellwood—who has publicly said Prime Minister Boris Johnson no longer has his support because of lockdown breaching gatherings in Downing Street during the COVID-19 pandemic—would not be suited to the top job, saying: “Brexit really is not safe in his hands or his allies.”

Speaking to Times Radio on Thursday, Ellwood described the issue as a “hot potato,” but said people should not “shy away” from the subject.

“Joining that single market, I believe, would strengthen our economy because it would remove so much red tape, it would ease the cost-of-living crisis, it would actually settle the difficult Irish problem on the Northern Ireland Protocol … and finally, it’s also to do with boosting our European credentials,” he said.

“Because we are now taking a lead in Europe on Ukraine, but the fact that this Brexit issue—particularly on Northern Ireland—is unresolved means, you know, we’re pulled back on this.”