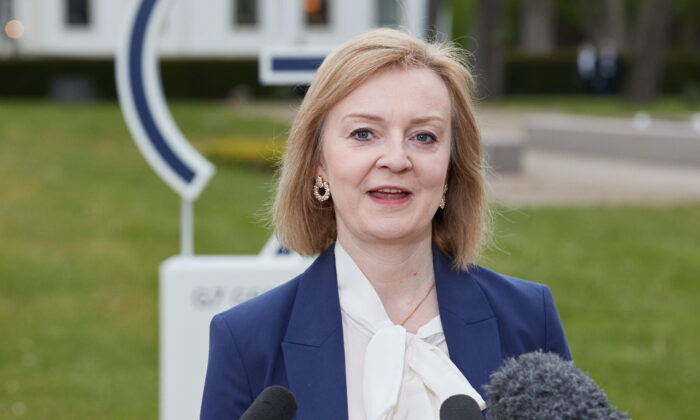 British Foreign Secretary Liz Truss speaks to media during bilateral meetings on the sidelines of the G7 Foreign Ministers Meeting at the Weissenhaus Grand Village Resort near Oldenburg in Holstein, Germany, on May 13, 2022. (Georg Wendt - Pool/Getty Images)
UK

The UK government is set to introduce new legislation overwriting parts of the post-Brexit trade deal on Northern Ireland, Foreign Secretary Liz Truss announced on Tuesday amid protests from opposition parties and the European Union.

The bill, which is due in the “coming weeks,” will propose separate “green” and “red” lanes for goods travelling between Great Britain and Northern Ireland, with those destined to stay within the UK freed from E.U.-level checks.

In so doing, the bill will “ensure that goods moving and staying within the UK are freed of unnecessary bureaucracy through our new green channel,” Truss said.

“This respects Northern Ireland’s place in the UK, in its customs territory, and protects the UK internal market. At the same time it ensures that goods destined for the E.U. undergo the full checks and controls applied under E.U. law.”

The Northern Ireland Protocol has been fiercely opposed by unionists in the British province, who complain that it effectively keeps Northern Ireland within the E.U. single market while erecting a border in the Irish Sea between the province and mainland Britain.

Northern Ireland has not had a functioning local government since February, when the Democratic Unionist Party (DUP), then the largest party in the regional assembly, withdrew from the power-sharing executive in protest against the protocol.

The foreign secretary said the government remains “open” to a “negotiated solution” with the E.U. but the “urgency” of the situation means “we can’t afford to delay any longer.”

The DUP welcomed Truss’ announcement. DUP leader Sir Jeffrey Donaldson told the Commons: “The statement today is a welcome if overdue step that is a significant move towards addressing the problems created by the protocol and getting power-sharing based upon a cross-community consensus up and running again.”

But the main opposition Labour Party questioned the legality of the move under international law.

Any threats to interfere with the Brexit trade agreement, which had been negotiated and signed by Prime Minister Boris Johnson’s own government, could have “wide-ranging and damaging repercussions undermining our ability to hold others to account for their own commitments,” said Labour’s shadow Foreign Office minister Stephen Doughty.

But Truss insisted that the UK’s proposals are “legal in international law,” and said the government will be “setting out our legal position in due course.”

The plan has also been criticised by the European Commission vice-president Maros Sefcovic, who has been involved in negotiations with Truss about the Northern Ireland Protocol, as he warned that Brussels could retaliate.

He said: “Should the UK decide to move ahead with a bill disapplying constitutive elements of the protocol as announced today by the UK government, the E.U. will need to respond with all measures at its disposal.”

David McAllister, a German member of the European Parliament who chairs the body’s foreign affairs committee, warned against unilateral action by the UK.

“Unilateral action would only make our work on possible landing zones more difficult,” he said.

“The E.U. takes a unified stance: we want sustainable solutions in the framework of the protocol. Renegotiations won’t serve the purpose. The protocol is part of the solution, it is not the problem.”