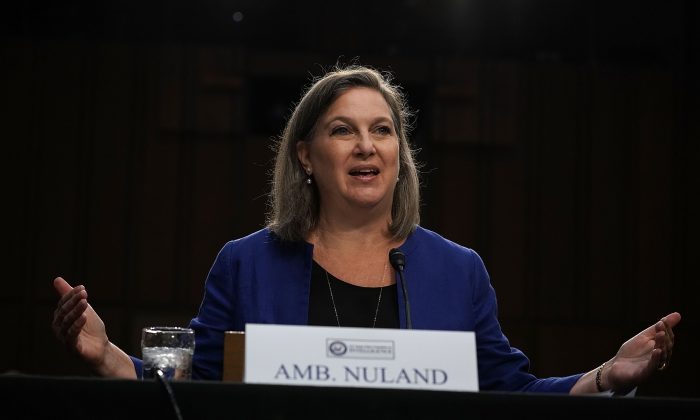 Former Assistant Secretary of State for European and Eurasian Affairs Victoria Nuland testifies during a hearing before the Senate Intelligence Committee on June 20, 2018. (Alex Wong/Getty Images)
By Jasper Fakkert

Steele is the author of the infamous “Trump dossier,” for which he was paid $160,000 by the Clinton campaign and the Democratic National Committee (DNC)—through law-firm Perkins Coie and Fusion GPS.

It was previously revealed that Steele provided the dossier’s unsubstantiated and uncorroborated allegations to the FBI as well as major media organizations such as The New York Times, The Washington Post, and CNN, in an effort to spread the narrative that then-candidate Trump colluded with Russia to win the election.

Up to now, however, Steele’s connection to other officials in the Obama administration had been unclear.

The existence of the briefing Steele gave at the State Department was revealed by the chairman of the U.S. Senate Select Committee on Intelligence, Sen. Richard Burr (R-N.C.), during a hearing on June 20 with Victoria Nuland, who served as assistant secretary of state for European and Eurasian affairs under the Obama administration.

However, when asked by Burr whether she was aware of the meeting, Nuland said, “I was not aware of it until afterwards,” contradicting her earlier statement that she had actively chosen not to be part of the meeting.

Nuland revealed in the hearing that she read some of Steele’s memos in mid-July 2016.

“I was first shown excerpts from the dossier, I believe, in mid-July of 2016. It wasn’t the complete thing, which I didn’t see until it was published in the U.S. press,” she said.

In February, it was already revealed that Jonathan Winer, the State Department’s special envoy for Libya, had been receiving information from Steele during the summer of 2016, and met with Steele in person in Washington. Winer is currently being investigated by the House intelligence committee.

Blumenthal, in turn, provided Winer with notes written by Cody Shearer, a former journalist with ties to the Clintons, that made allegations similar to those contained in Steele’s dossier.

Winer then provided these notes to Steele, who shared them with the FBI, Winer himself wrote in an opinion article for The Washington Post.

The way the information traveled between agencies could have been part of an intentional effort to create seemingly corroborated information, in order to justify an FBI investigation that otherwise relied on little more information than opposition research.

Steele’s information was highly questionable, not just because of the fact that he was paid by the Clinton campaign and the DNC, but also because his memos relied almost exclusively on Kremlin-linked Russian officials.

In their application for a FISA warrant to spy on Trump campaign volunteer Carter Page, the FBI and the Department of Justice hid the fact that key information used in the application came from the Trump dossier and was paid for by political actors.

However, the FBI did obtain the FISA warrant, which was extended several times, including after Trump was sworn into office, by Deputy Attorney General Rod Rosenstein. Under the so-called “two hop rule,” which allows FISA warrant holders to spy on those who are separated from the initial warrant subject by two degrees, Trump and much of his campaign staff could have been surveilled.

The Justice Department Office of the Inspector General, in a report released on June 14, revealed text messages sent by the lead FBI agent on the Trump campaign case, Peter Strzok, in which he vowed to stop Trump from becoming president.

Strzok has been subpoenaed by Congress to testify before the House judiciary committee.