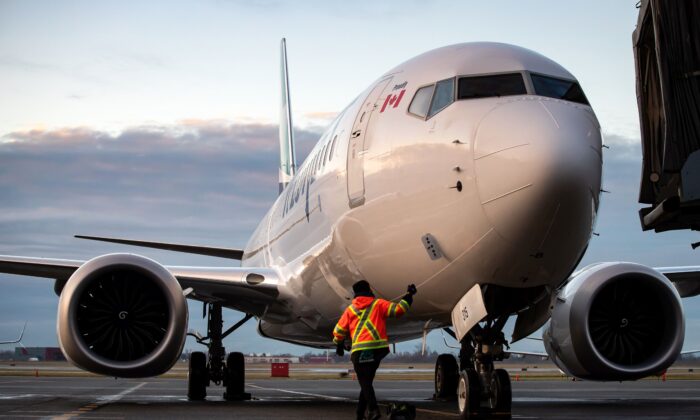 A ground worker approaches a WestJet Airlines Boeing 737 Max aircraft after it arrived at Vancouver International Airport on Jan. 21, 2021. (The Canadian Press/Darryl Dyck)
By Katabella Roberts

A federal grand jury in the Northern District of Texas indicted Mark A. Forkner, 49, who previously served as Chief Technical Pilot for Boeing, after he deceived federal safety regulators about the 737 Max jetliner in an attempt to save tens of millions of dollars for the airplane manufacturer.

According to court documents, Boeing began developing and marketing the 737 MAX in and around June 2011.

In a press release from the DOJ, prosecutors accuse Forkner of providing the FAA with “materially false, inaccurate, and incomplete information” about a new part of the flight controls for the Boeing 737 MAX called the Maneuvering Characteristics Augmentation System (MCAS).

MCAS provides consistent airplane handling characteristics in a very specific set of unusual flight conditions, such as when the pilot is flying the airplane manually, when the airplane nose approaches a higher-than-usual angle or when the planes wing flaps are up, according to Boeing,

In and around November 2016, Forkner discovered information about an important change to MCAS but did not share this information with the FAA AEG.

Due to the false and inaccurate material Forkner provided, a key document published by the FAA AEG called the “737 MAX Flight Standardization Board Report” (FSB Report) lacked any reference to MCAS, which resulted in airplane manuals and pilot-training materials for U.S.-based airlines also lacking any reference to the flight control law.

Subsequently, Boeing’s U.S.-based airline customers were deprived of important information when making and finalizing their decisions to pay Boeing tens of millions of dollars for 737 MAX airplanes.

“Forkner allegedly abused his position of trust by intentionally withholding critical information about MCAS during the FAA evaluation and certification of the 737 MAX and from Boeing’s U.S.‑based airline customers,” said Assistant Attorney General Kenneth Polite Jr. of the Justice Department’s Criminal Division.

“In an attempt to save Boeing money, Forkner allegedly withheld critical information from regulators,” said Acting U.S. Attorney Chad Meacham for the Northern District of Texas. “His callous choice to mislead the FAA hampered the agency’s ability to protect the flying public and left pilots in the lurch, lacking information about certain 737 MAX flight controls. The Department of Justice will not tolerate fraud—especially in industries where the stakes are so high.”

The FAA AEG began reviewing and evaluating MCAS after a Boeing 737 operated by Indonesian airline Lion Air crashed 13 minutes after departure in 2018. All 189 people aboard the plane were killed.

The FAA learned that MCAS was operating on the flight in the moments before the crash and discovered that important information about the augmentation system had been withheld.

In 2019, 157 people died when a 737 operated by Ethiopian Airlines crashed shortly after takeoff. FAA also learned that MCAS was operating in the moments before the crash. Shortly after that crash, all 737 MAX airplanes were grounded in the United States.

He is expected to appear in court on Friday in Fort Worth, Texas, before U.S. Magistrate Judge Jeffrey L. Cureton of the U.S. District Court for the Northern District of Texas.

In January, Boeing agreed to pay the DOJ $2.5 billion and admitted that employees misled regulators about the safety of its 737 MAX aircraft.

The government and the company said that the settlement includes money for the crash victims’ families, airline customers, and a fine.