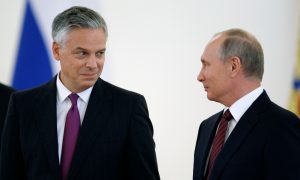 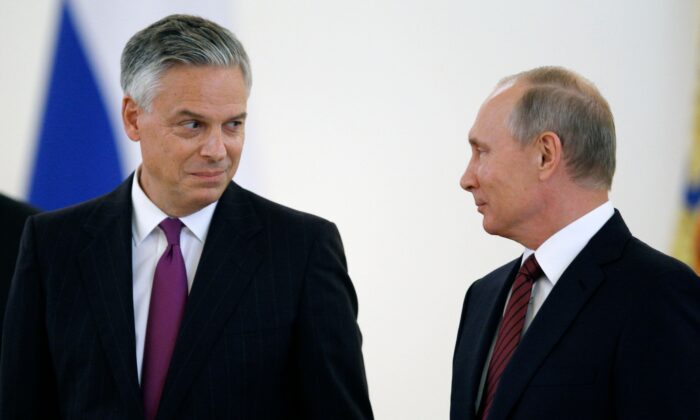 Russian President Vladimir Putin (R) looks at US ambassador to Russia Jon Huntsman during a ceremony of receiving diplomatic credentials from foreign ambassadors at the Kremlin in Moscow on Oct. 3, 2017. (Pavel Golovkin/AFP via Getty Images)
Politics

Jon Huntsman, a former ambassador in the Trump and Obama administrations, said he’s running to be governor of Utah.

Huntsman said he and his wife served the country in ambassador positions and now want to serve Utah again.

“I believe that the most important thing we can do as people in the greatest state in America is to secure the future, and secure opportunities—life, liberty, and happiness—for the next generation of Utahns. I do believe that the most pressing issue today, as it will be tomorrow and for the foreseeable future, has to deal with growth,” Huntsman added, noting many people are moving to Utah.

Huntsman, 59, was elected governor of Utah in 2004 and reelected in 2008. He left to become President Barack Obama’s U.S. ambassador to China.

President Donald Trump made Huntsman the U.S. ambassador to Russia. Huntsman stepped down on Oct. 3. Huntsman also ran for president in 2012.

Cox said in a statement earlier this year that he would welcome Huntsman to the race.

“Abby and I are excited that the ambassador and Mary Kaye have decided to return to Utah,” Cox wrote. “If he decides to run for governor again, it would make me a better candidate. I have no doubt that he would run a positive campaign and that voters will benefit as we share our ideas for the future of Utah.”

Earlier in the week, Huntsman told the Salt Lake Tribune in a conversation not released until after his announcement that he is not decided yet in terms of the impeachment efforts against Trump.

“First of all, I’m troubled, very troubled by the information that has come out with respect to a possible quid pro quo, particularly the work done by [Rudy] Giuliani. I don’t think that has any place in our foreign policy, particularly when you’re subcontracting out those kinds of communications that otherwise ought to be handled on a government to government basis,” Huntsman said.

“We need to hear more. We need folks to come forward with information. We have a whistleblower. We have a statute that protects whistleblowers, that should be respected. We should collect the information, as we always do, in a transparent fashion. We should let the American people look and analyze that information and see where it leads us. But we’re just, I think, in the front end of a lot of this right now.”

Huntsman said there shouldn’t be a rush to impeachment, adding, “My fear is that with an election, a national election less than a year away, why not let the people be the final arbiters, the final decision-makers on what they think, once all the information is brought forward?”