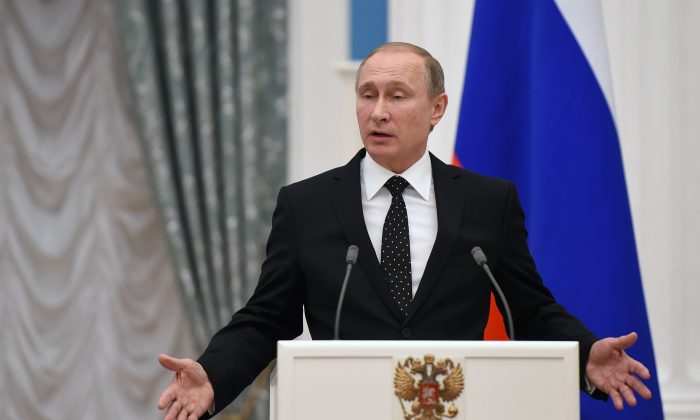 Russian President Vladimir Putin at a press conference at the Kremlin in Moscow on Nov. 26, 2015. (Stephane de Sakutin/AFP/Getty Images)
Europe

After a remarkably fraught and complicated 2015, Vladimir Putin’s Russia finds itself still sanctioned by the West for its conduct in Ukraine, dogged by falling oil prices, and dicing with a deadly conflict in Syria. And it’s increasingly difficult to foresee the challenges Putin and his country will face in 2016—or how they will handle them.

Decision-making in Moscow has become highly consolidated and hostage to the whimsy of Putin and his group think-prone advisers. And whether in the domestic realm or in the international environment, trying to decode a Russian grand strategy is a monumental challenge for anyone who tries.

The predictable argument these days revolves around working out whether Putin has a strategy, or whether he is simply an opportunist.” Then there is the often-argued trope that Putin’s foreign policy, for example in Syria, “is for his domestic audience and aimed at keeping his hold on power” by appealing to nationalism and distracting away from domestic and economic failings.

What is certain is that Russia’s greatest challenges are domestic—and that Putin will spend 2016 desperately hoping that the price of oil starts to climb.

What is certain is that Russia’s greatest challenges are domestic—and that Putin will spend 2016 desperately hoping that the price of oil starts to climb. If it remains below the $40-a-barrel mark, Putin will have to tough out a year (and more) under serious financial strain. He may then be forced to distract his internal audience further with foreign actions in Syria and Ukraine, while finding the associated price tag increasingly trying.

That Russia’s long-term prospects are not encouraging is most obvious in the domestic realm. The wise approach would be to turn to domestic nation-building. There’s plenty to be done: Illiberal domestic economic policies need to be addressed, as does the erosion of institutions due to corruption, while failing central bank policies are badly in need of reform. But, as Andrey Movchan has pointed out, the 2016 budget leaves no hope for reform or for the development of viable alternatives to natural resources.

If nothing else, the Cold War made it clear that long-term power and security are to some extent dependent on what happens in the economic sphere. In other words, the United States and the West did not win the Cold War so much as the Soviet Union collapsed due to an economic system that was built on sand. But while it seems that China has learned that lesson from Soviet misadventures, Russia has not internalized this lesson.

As far as the economy goes, Putin has recently suggested that “Russia has passed the peak of the crisis” but not the crisis itself. Whether that is true remains to be seen. Most worrying for Putin is that 2014 marked the year that household incomes declined for the first time. To be clear, it is domestic economic policies coupled with declining oil prices that have been the major cause of this and not, for example, the Western economic sanctions placed on Russia after it annexed Crimea.

This, more than anything, will test the so-called unspoken social contract between the president and his citizens—that is, ever-increasing living standards in exchange for forgoing some democratic freedoms, turning a blind eye to corruption in exchange for an otherwise rigorous application of the rule of law.

There is no question that Putin retains very high domestic approval ratings, but there are increasing signs of anger toward the government’s approach to domestic economic issues.

There is no question that Putin retains very high domestic approval ratings, but there are increasing signs of anger toward the government’s approach to domestic economic issues. These issues range from large-scale youth emigration, more general demographic concerns such as high mortality and low fertility, to drastic public health anxieties.

Putin’s consolidated power does give him a degree of freedom of maneuver in the short term—unlike most Western leaders—but he seems as yet unwilling to use that authority to address these domestic failings. Putin’s recent Annual Presidential Address was much more about blaming foreign actors for Russia’s economic woes than speaking to badly needed internal reforms.

If Putin and his government continue resorting to ostentatious foreign maneuvering to divert attention from problems at home, they will soon run into trouble.

If Putin and his government continue resorting to ostentatious foreign maneuvering to divert attention from problems at home, they will soon run into trouble. If Putin’s commitment to Assad in Syria becomes more and more costly, both in terms of blood and treasure but also as a long-term strategy, that will be bad enough—but foreign policy, however spectacular, will also do nothing to head off the population’s bitterness over a sustained decline in household incomes.

Although a grand strategy that seeks to ameliorate both Russia’s domestic and structural limitations is often hard to discern, Putin will inevitably keep pursuing certain identifiable goals. He clearly wants to position Russia as an indispensable player in areas of critical global diplomacy, most obviously in the greater Middle East. But there are two sides to that coin—while increased conflict in the Middle East may benefit Russia due to a spike in oil prices, Russia does have real security concerns regarding its geography and radical Islamic terrorism.

Putin will also continue to influence the activities and behaviors in what he considers Russia’s natural sphere of influence. Russia’s approach to Ukraine is a reminder that Putin is willing to sacrifice economic hardships for what he sees as primary security concerns. To that end, Putin will also attempt to undermine U.S. and EU influence whenever he deems it in his interest to do so. His recent decision to officially proclaim NATO’s expansion as a threat to Russia’s national security demonstrates how far the two camps have drifted apart.

This is dangerous ground. As Dmitri Trenin has recently argued, an acute foreign policy crisis could trigger the collapse of not just the system, but the entire country. This is an unlikely scenario—and one should always be wary of questionable assumptions when it comes to analyzing the strength of the Russian regime. But if Russia’s foreign policy is primarily used for shoring up domestic approval, it follows that setbacks in this arena coupled with falling oil prices and household wages could do serious damage to the Kremlin.

From a Russian point of view, and with some justification, years since the Cold War have been deeply unfavorable to Russia. There is no doubt that Putin seeks to regain what he sees as Russia’s rightful place as a global power, but without addressing Russia’s domestic shortcomings it will never be a truly great power; and nuclear sabre-rattling or personal attacks on foreign leaders will not change that cold hard fact.

Simon J. Smith is a lecturer of international relations at Staffordshire University in the U.K. This article was previously published on TheConversation.com