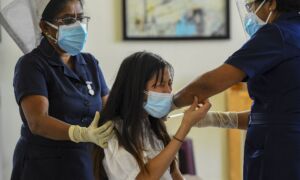 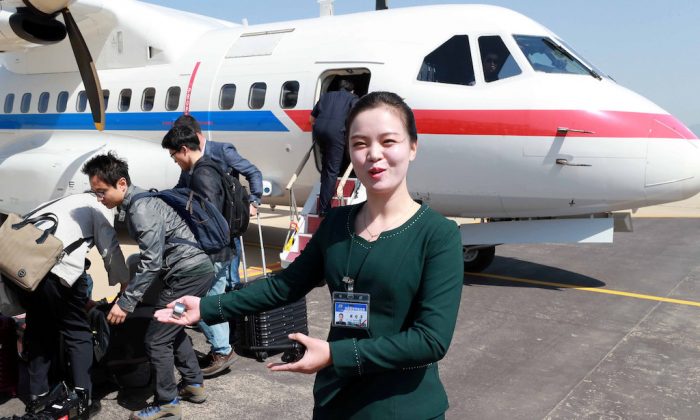 A North Korean airport official guides South Korean journalists, who will visit the nuclear testing site at Punggye-ri, upon their arrival at Kalma airport in Wonsan, North Korea, May 23, 2018. (News1/Pool via Reuters)
Asia & Pacific

SEOUL—International journalists left on a marathon journey to a North Korean nuclear test site on Wednesday, after Pyongyang belatedly cleared a number of South Korean media to witness what it says will be the dismantling of its only nuclear test facility.

Travel will involve an 11-hour train ride, a four-hour bus journey, and then a hike of another hour, a reporter with Russia’s RT said on Twitter.

North Korea has suspended talks with the South and threatened to pull out of an upcoming summit between North Korean dictator Kim Jong Un and President Donald Trump, but the invitation to media was seen as an indication that its offer to end its nuclear tests still holds.

It had previously declined to take the South Korean reporters in protest against U.S.-South Korean “Max Thunder” air combat drills.

Reporters from news outlets from other countries said on Twitter they arrived in the North Korean port city of Wonsan on Tuesday. The eight South Koreans arrived in Wonsan on Wednesday, where they were forced to leave their radiation detectors, satellite phones, and Bluetooth mice before they all set off for the test site, according to South Korean media pool reports.

North Korea announced it would use explosives to close test tunnels, expected to occur on Thursday or Friday.

“We hope for an early realization of complete denuclearization of the Korean peninsula through a North Korea-U.S. summit and dialogue of various levels, starting with the abolition of the nuclear test site,” ministry spokesman Baik Tae-hyun told a news briefing.

North Korea’s last-minute acceptance of South Korean reporters came amid concerns that Kim was starting to back away from his promise to scrap the nuclear program, which it has pursued in defiance of years of U.N. Security Council resolutions.

China said that both the United States and North Korea were still making preparations for the summit and Beijing hoped both sides can “clear away distractions.”

Seoul is seeking to mediate between the United States and North Korea, with South Korean President Moon Jae-in visiting Washington on Tuesday to meet with President Trump.

A senior South Korean official told reporters on condition of anonymity: “Given the North’s thinking and statements alike, we would be able to turn around the mood after the Max Thunder drills from the current standoff and restart dialogue.”

North Korea had previously agreed to the goals of complete denuclearization and peace.