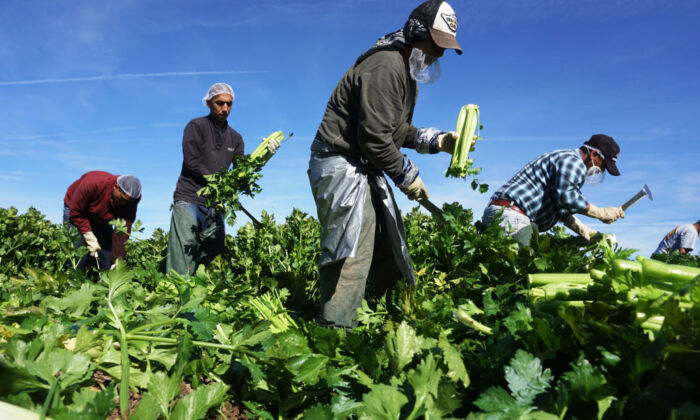 Multiple foreign countries and investment groups have been quietly acquiring land designated for agriculture in the United States over the past decade.

Foreign interests presently control 37.6 million acres of pasture, timber, and farmland. This amounts to an area roughly the size of Iowa or Illinois.

Holdings of U.S. agricultural land by foreign investors grew by 55 percent in a 10-year stretch, from 24.2 million acres controlled by outside nations and businesses in 2010.

Much of this surge has been attributed to foreign-owned wind companies using a significant amount of land, according to the U.S. Department of Agriculture (USDA).

During the early days of the COVID-19 pandemic, as businesses and homes shut their doors, that number increased by 2.4 million acres from 2019 to 2020.

Russia, Iran, China, and Mexico are listed as owners of U.S. farmland, according to a November 2021 congressional report. However, businesses in Canada, the Netherlands, Italy, and the UK have the most extensive land holdings in the United States.

Mexico has a spot on the top 10 list with U.S. agricultural land ownership listed at 700,000 acres. Two of the world’s largest offshore banking hubs—the Cayman Islands and Switzerland—own 600,000 acres each.

The trifecta of investors—China, Russia, and Iran—owns a combined 200,000 acres of U.S. agricultural land, with China being the largest owner at an estimated 192,000 acres. This leaves Russia and Iran with ownership of 8,000 acres of U.S. mainland soil.

U.S. farmers aren’t sitting idly by while other nations and companies buy up precious farmland. Some are acutely aware of this trend and think the public needs to be better informed.

“I don’t think everybody really understands,” Mike Downey, a partner at Next Generation Ag Advocates, told The Epoch Times.

Downey is a cornerstone member of “Next Gen,” which was founded in 2018 by two farmers concerned about the rise in consolidated agriculture in the United States.

The organization works to match next-generation producers, or aspiring producers, with farms that don’t have a successor.

Keeping U.S. family farms in the hands of individuals is their main priority. One USDA statistic on their website states that 70 percent of family farms will change hands in the next 15 years.

“We’re trying to keep farms in our community,” Downey said.

He noted that 68 percent of small farmers don’t have anyone to take over their business and that the United States can expect a “huge transition of land ownership” over the next decade. And with loose restrictions on foreign investment and owners, many of these farms could be affected.

It varies, but most U.S. states have little to no restrictions on foreign ownership of land.

Texas and Maine have the laxest regulations. Consequently, those states also have the highest percentages of foreign-owned agricultural land at 4.4 million acres and 3.3 million acres, respectively.

Sen. Chuck Grassley (R-Iowa) has been one of the most vocal legislators about regulating foreign ownership of U.S. agricultural land. He helped write the Agricultural Foreign Investment Disclosure Act (AFIDA), which eventually became law in 1978. He also introduced the Food Security Is National Security Act.

“If foreign buyers, especially those backed by government regimes, are buying up prime farmland in America as a strategy to dominate food production, there’s obvious concerns about protecting our ability to feed our own people,” Grassley stated on his website.

The senator echoed Downey’s sentiment about the change of ownership of U.S. farmland, saying that it will be difficult to replace an aging farming population if agriculture remains a prime target for wealthy investors.

“If deep-pocketed investors come in, foreign or not, it drives up prices and makes it harder for new and beginning farmers to get started,” Grassley said.

Other senators, such as Elizabeth Warren (D-Mass.), have expressed an interest in supporting federal legislation similar to the ban in Iowa, which currently has some of the nation’s strictest regulations on agricultural land ownership.

Former Missouri Lt. Gov. Joe Maxwell has spent years lobbying for states to enact stricter controls over foreign investment in U.S. cropland. He also maintains that AFIDA disclosures are unreliable and that better tracking is needed.

“We should know who’s buying up America’s farmland and for what purpose they’re doing it,” Maxwell told Investigate TV.

When it comes to purchasing farmland, pastures, or timberland in the United States, the USDA acts as both the gate and record keeper of these transactions.

A spokesperson for the USDA told The Epoch Times that AFIDA requires disclosure of foreign land purchases. Part of this is done through the submission of an FSA-153 form. Subsequently, the USDA then releases this information as part of an annual report.

“USDA’s [goal] is to accurately capture the data required by the AFIDA law and report it to Congress and the public,” the spokesperson said.

Nevertheless, Congress says there are gaps in this data, which has raised alarm bells for some, including Maxwell. He has spent years lobbying for states to enact stricter controls over foreign investment in cropland.

And as commodity prices continue to climb, some think this will only light a fire under foreign investors to continue buying U.S. agricultural land.

“With everything going on with inflation and now the war in Ukraine, it seems there’s growing interest in farmland,” Downey said.

He noted that when it comes to land, there’s an old saying that’s fitting for the situation: They’re not making any more of it.

And when it comes to loose state regulations on foreign land purchases, Downey said, “Some conversations we’ve had in-house recently is ‘what are the teeth’ to enforce that?”

Steps taken to tighten the reins on foreign ownership include the introduced H.R. 5490, which will require the USDA and the Government Accountability Office to conduct a detailed analysis and report to Congress on the extent of foreign influence in the U.S. agriculture industry.

Additionally, the House FY 2022 agricultural appropriations legislation will require the USDA to take actions to “prohibit the purchase” of agricultural land by companies owned in full or part by China, Russia, Iran, and North Korea.