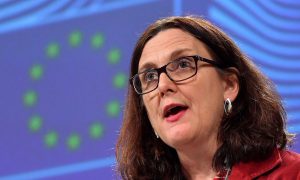 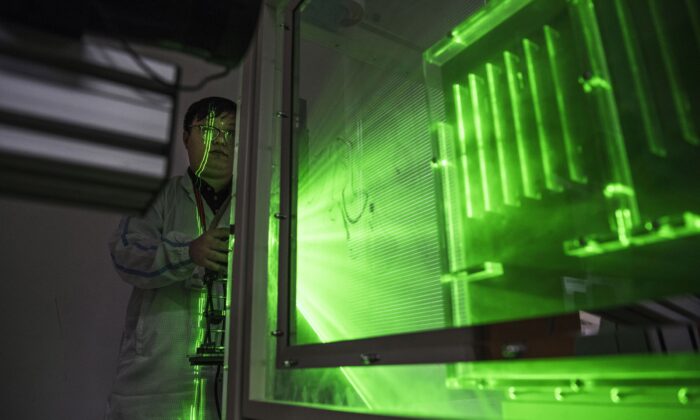 A Huawei thermal engineer performs a heat test in the research and development area of the Bantian campus in Shenzhen, China, on April 12, 2019. (Kevin Frayer/Getty Images)
Chinese Regime

China passed a new law that orders all individuals and businesses in China to apply sanctions the regime has launched against foreign counterparts. It also bars companies from complying with foreign restrictions placed on Chinese firms and citizens.

Moreover, the law came into effect on June 10, when the regime’s rubber-stamp legislature approved it without a third reading, which is a prerequisite under China’s Legislative Law.

“It orders foreign citizens to act against their own homelands, and be loyal to the Chinese Communist Party [CCP],” said Tang Jingyuan, a U.S.-based China affairs commentator, in a phone interview with The Epoch Times on Thursday.

“The timing is key. The CCP passed the law right after President Joe Biden started his Europe trip. Biden will talk with European leaders about the investigation into the origin of the CCP virus, which likely leaked from the Wuhan lab,” Li Hengqing, a scholar at the Washington Institute for Information and Strategy, told The Epoch Times on June 10.

Li believes that the CCP virus, commonly known as novel coronavirus, leaked from the Wuhan Institute of Virology. Once this fact is verified by the world, other countries will hold the CCP regime accountable, Li said.

The Chinese rubber-stamp legislature passed and released the “Anti-Foreign Sanctions Law” on June 10.

The law requires that all individuals and organizations in China, no matter their citizenship or registered status, must execute the sanctions that the Beijing regime launched.

Furthermore, clause 12 of the law states: “No organization or individual can enforce or help to enforce the discriminatory restrictive measures that foreign countries use against Chinese citizens and organizations … Chinese citizens or organizations can file a lawsuit against foreign entities [who are complying with foreign-imposed sanctions], and ask them to stop the infringement and pay compensation for [Chinese] losses.”

In retaliation against foreign-imposed sanctions, the law targets foreign violators and their direct relatives, company managers and directors, as well as other related individuals and organizations.

Punishment methods for violations under the new law include refusing or revoking visas, seizing property and assets, and banning trade activity.

Wang Wenbin, spokesman for the Chinese Foreign Affairs Ministry, said in a news brief on June 10 that the law is a legal tool to retaliate against foreign sanctions.

When asked whether the law would impact diplomatic relations with other countries, Wang said “the concern … is completely unnecessary.”

In the past months, the United States, European Union, Canada, and the UK have imposed sanctions on Chinese officials, accusing them of serious human rights abuses against Uyghurs in Xinjiang, and destroying autonomy in Hong Kong.

On May 12, the U.S. government announced sanctions against a CCP official for persecuting Falun Gong, as the Beijing regime’s brutal suppression of the spiritual practice approaches its 22nd anniversary.

So far, the U.S. government has imposed sanctions on about 45 Chinese officials, including all 14 vice-chairs of the rubber-stamp legislature’s standing committee. Meanwhile, Washington also blacklisted Chinese companies from buying American technology, such as China’s largest telecommunications manufacturer Huawei, which violated U.S. sanctions against Iran.

The Chinese regime started its retaliation earlier this year. On Jan. 21, the regime banned 28 Americans and their direct relatives from visiting mainland China and Hong Kong.

“The newly launched Anti-Foreign Sanctions Law is a comprehensive retaliation against the United States and other developed countries. It covers all individuals and organizations and threatens to grab their property if they don’t listen to the Beijing regime,” Tang told The Epoch Times.

Tang worries that the CCP will require that foreign companies buy forced-labor products, such as purchasing cotton from Xinjiang; and sell American technology to Chinese enterprises, such as selling semiconductor chips to Huawei.

“I see risks that this law brings to the society. I can imagine that foreign companies will have to leave the China market before the CCP forces them to do things [against U.S. sanctions], and Chinese enterprises are forced to stop purchasing imported technology,” Tang said.

On Sept. 15, 2020, SMIC told the Chinese state-run Securities Times that it stopped supplying chips to Huawei because SMIC used American technology to make its chips and Huawei was blacklisted from purchasing any American technology.

“Under China’s Anti-Foreign Sanctions Law, SMIC has no other choice but to supply chips to Huawei. Once SMIC sells chips to Huawei, it violates the American law, and loses its right to use American technology as well as its global market,” Tang said.

For foreign companies, their situations are worse than SMIC. “They will lose all their assets and other property in China if they don’t follow the Beijing regime’s law,” Tang added.