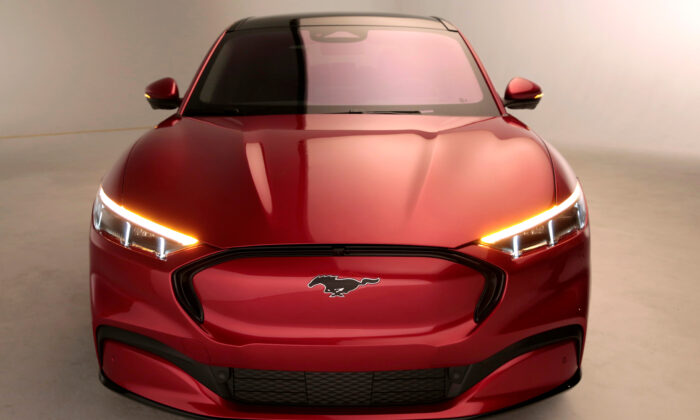 Ford Sees 77 Percent Rise in Sales of EV Mustang Mach-E in October: What You Need to Know

Ford Motor Co. said on Wednesday it sold more Mustang Mach-Es in October compared to a month ago but the jump was shy of the volumes that it scored in July.

The Dearborn, Michigan-based automaker said it sold 2,848 Mustang Mach-Es in October, up 76.9 percent compared with a month ago.

The latest sales numbers are still below the peak of 2,854 units that it had sold in July.

Ford has sold a total of 21,703 units of its five-door electric crossover so far this year. The company noted that “Mach-E ranks second in full electric SUV sales,” just behind Tesla Inc’s Model Y.

Ford expanded sales in the electrified vehicle segment by 53.7 percent month-over-month to 14,062 vehicles—which is still small when compared to total U.S. sales of 175,918 vehicles in October.

The automaker said its Ford E-Transit is sold out and the electric F-150 Lightning has secured more than 160,000 reservations.

Ford produced fewer Mustang Mach-Es during the month. The company said it made 3,790 Mach-Es in October, a drop of 29.7 percent on a month-on-month basis, its lowest so far this year.

Mustang Mach-E is Ford’s first all-electric crossover named after the iconic Mustang. The sales of the traditional Mustangs have been coming down. Ford has sold 44,141 Mustangs so far this year, a drop of about 15.2 percent on a year-on-year basis.

Ford shares closed 3.4 percent higher at $18.6 a share on Wednesday.