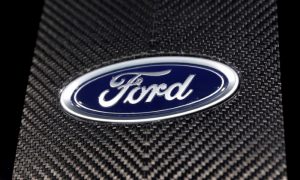 A row of new Ford F-150 pickup trucks are parked for sale at a Ford dealer in the Denver suburb of Broomfield, Colorado, on April 14, 2011. (Rick Wilking/Reuters)
Companies

WASHINGTON—Ford Motor Co said on Wednesday it was recalling about 1.48 million F-150 pickup trucks in North America due to a potential transmission downshift issue that could increase the risk of a crash.

Ford said select 2011-2013 model year trucks with six-speed automatic transmission could experience an unintended downshift into first gear without warning, which could result in the loss of vehicle control. Ford is aware of five accidents, including one report of whiplash potentially related to the issue.

The recall covers 1.26 million trucks in the United States and 221,000 in Canada. Dealers will update the powertrain control software.

Ford also said it is issuing two other recalls. One covers 28,200 2017-19 Lincoln Continental vehicles in North America for door latches that may not engage due to the buildup of silicon contamination and could result in the door opening while driving.

Ford said it was not aware of any reports of accidents or injuries. Dealers will replace the door latch assemblies in all four doors.

Ford is also recalling 4,200 2019 model Ford Mustang, Lincoln Nautilus, and Lincoln Navigator vehicles for instrument panel cluster assemblies that are blank when the vehicles are started. Dealers will update the software. No crashes are reported linked to the recall.

On Jan. 4, 2019, Ford was recalling more than 953,000 vehicles worldwide to replace Takata passenger airbag inflators that can explode and hurl shrapnel.

The move includes over 782,000 vehicles in the United States and is part of the largest series of recalls in U.S. history.

Takata used the chemical ammonium nitrate to create an explosion to inflate airbags. But it can deteriorate over time due to heat and humidity and explode with too much force, blowing apart a metal canister designed to contain the explosion. At least 23 people have been killed worldwide and hundreds injured by the inflators.

Ford says it doesn’t know of any injuries in vehicles included in this recall.

More than three years after the U.S. National Highway Traffic Safety Administration took over management of recalls involving Takata inflators, one-third of the recalled inflators still have not been replaced, according to an annual report from the government and a court-appointed monitor.

The report says 16.7 million faulty inflators out of 50 million under recall have yet to be replaced. And 10 million more inflators are scheduled to be recalled, including the Ford vehicles.

The inflators grow more dangerous as they get older because ammonium nitrate deteriorates due to high humidity and cycles from hot temperatures to cold. The most dangerous inflators are in areas of the South along the Gulf of Mexico that have high humidity.