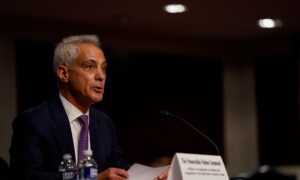 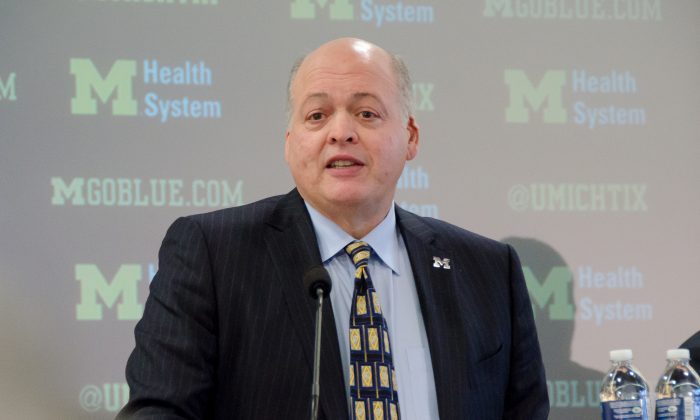 Jim Hackett at the University of Michigan in 2014. (Creative Commons/Wikimedia)
Business & Economy

Hackett, 62, who overhauled furniture maker Steelcase Inc and then turned around the ailing University of Michigan football program, for the past year has led the Ford unit developing self-driving cars and related services. As part of a broader shake-up, he replaces Mark Fields, 56, who spent less than three years as CEO.

Ford Chairman Bill Ford Jr. said he wanted Hackett to speed up decision-making and attack costs, but did not offer many specifics.

“The clock speed at which our competitors are working …requires us to make decisions at a faster pace,” Ford said.

Bill Ford and other descendants of company founder Henry Ford effectively control the automaker through a special class of shares, but many investors share his concern that the company is running out of time.

Ford shares were up 1.7 percent at $11.06 in afternoon trading. At Friday’s close, they had fallen 37 percent since Fields took over three years ago at the peak of the U.S. auto industry’s recovery.

GM has moved faster than Ford to slash unprofitable operations, and Tesla has been quicker to deploy new technology.

“We have to modernize the business” and move “decisively to address underperforming areas,” he said. He suggested Ford could reduce inventories of unsold vehicles through better use of market data.

Hackett, a former CEO of furniture manufacturer Steelcase Inc and a former Ford director, becomes the latest in a line of non-family CEOs brought in with a mandate to change the management culture at one of the auto industry’s oldest institutions. That task has frustrated many of his predecessors, including Bill Ford, who had been CEO before replacing himself in 2006 with Boeing Co executive Alan Mulally.

The decision to replace Fields did not result from a single event, Bill Ford told Reuters.

“There is no smoking gun here,” he said. “It’s more the way we are organized, the way Jim is going to streamline the organization.”

A former football player at the University of Michigan and its interim athletic director, Hackett was tapped in March 2016 to run Ford Smart Mobility, a unit established to oversee and coordinate forays into autonomous driving, ride sharing and other ventures.

In that role, he helped oversee Ford’s acquisition of San Francisco ride-sharing company Chariot and its $1 billion investment in Argo AI, a self-driving startup focused on robotics and artificial intelligence.

Hackett was previously CEO of Grand Rapids, Michigan-based Steelcase, where he slashed thousands of jobs, then refocused the company on innovation.

The upheaval at Ford underlines pressure on all three Detroit automakers to prove they can avoid losses as the U.S. market begins to slow from last year’s record sales.

The shake-up at Ford may bring scrutiny to its own plans in the region. The company posted a record $1.2 billion profit in Europe last year but warned that the impact of Britain’s vote to leave the European Union would put a dent in 2017 earnings.

Jim Farley, Ford of Europe chief since January 2015, will oversee all of the company’s regions, global marketing and sales, as well as its Lincoln Motor Co.

The company is also putting government relations and corporate communications under Ford Jr, and Hackett said the great-grandson of Henry Ford would have a higher public profile.

The automaker has tangled with U.S. President Donald Trump, who spent more than a year criticizing it on the campaign trail for expanding operations in Mexico.

But Trump praised Ford in January for scrapping a planned Mexican car factory and announcing plans to add 700 jobs in Michigan. Fields, who made several trips to the White House this year, said Ford would have made the decision regardless of who was president.

Fields, who earned $22.1 million in 2016 and had a 28-year-career at Ford, also faced a clamor for share repurchases at the company’s annual meeting earlier this month.

He did not respond to repeated messages seeking comment.

Ford said last week it would cut 1,400 staff positions in North America and Asia, a small fraction of the 20,000 job reductions some news outlets had reported were imminent.

The company reported a record $10.4 billion in pretax earnings in 2016, but investors were concerned by a weak first quarter and lower profit forecast for 2017, as well as higher costs for investments in “emerging opportunities.”

Tesla was valued at $51 billion on Friday, more than Ford’s $43 billion. The contrast shows investors’ faltering confidence that old-line automakers can make the transition to a future where software substitutes for pistons and transportation is sold by the mile or the minute.

At the same time, GM is turning up the pressure in the North American truck and sport utility business, the source of 90 percent of Ford’s earnings.