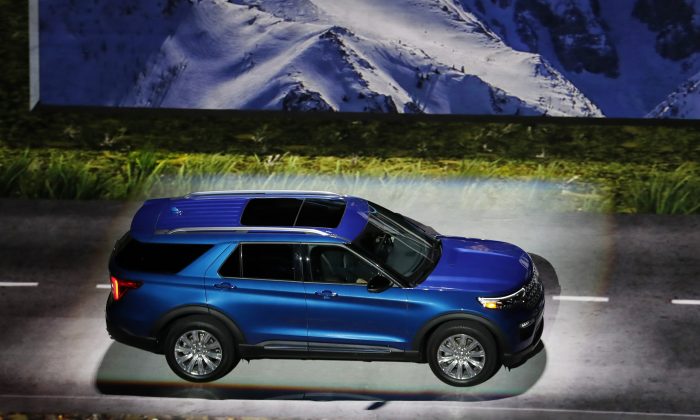 Ford Europe to Slash Thousands of Jobs in Turnaround Plan

FRANKFURT—Ford said on Jan. 10, it will cut thousands of jobs, look at plant closures and discontinue loss-making vehicle lines as part of a turnaround effort aimed at achieving a 6 percent operating margin in Europe.

Ford Europe has been losing money for years and pressure to restructure its operations has increased since arch-rival General Motors raised profits by selling its European Opel and Vauxhall brands to France’s Peugeot SA.

Ford said it will seek to exit the Multivan segment and focus on developing more profitable “crossover” and sports utility vehicles, and will stop manufacturing automatic transmissions in Bordeaux in August. It will also review its operations in Russia, and combine the headquarters of Ford U.K. and Ford Credit to a site in Dunton, Essex.

“We are taking decisive action to transform the Ford business in Europe,” Steven Armstrong, group vice president, Europe, Middle East, and Africa, said in a statement.

We are taking decisive action to make #Ford sustainably profitable in Europe, working collectively with all stakeholders to deliver a more focused line-up of European-built passenger vehicles, while growing our import and commercial vehicle businesses. https://t.co/39tgKKt8gs

“We want to be a net contributor of capital and not a net detractor,” Armstrong told journalists on a later call, referring to Europe’s financial contribution to U.S. parent Ford Motor.

Asked whether the revamp could include plant closures in Europe, Armstrong said: “A review of the manufacturing footprint is part of this process.”

Armstrong said any layoffs and plant closures at Ford would be subject to the outcome of formal negotiations with labor representatives, adding that he hoped that job cuts could be achieved by “voluntary means.”

Unite, Britain’s biggest trade union said it was engaging with Ford in an effort to safeguard jobs.

Unite, the UK’s largest union representing car workers, said it would be engaging positively with Ford to look after the interests of its UK employees after the carmaker announced a shake-up of its European operations today (Thursday 10 January).https://t.co/GB5cOAB5yF

The cost-cutting plan has not been adjusted to account for the possibility of a “hard” exit by Britain from the European Union without securing tariff-free cross-border trade, Armstrong said.

“If Brexit went in the wrong direction we would have to have another look, to mitigate that,” Armstrong said. A Ford spokesman said the carmaker currently assumes that any Brexit deal would keep tariff-free trade between Britain and Europe.

Ford Europe, which employs 53,000 people, has struggled to turn a profit, reporting a $282 million (245 million euro) loss before interest and taxes in the third quarter, equivalent to a negative 3.3 percent EBIT margin.

Armstrong declined to quantify the job cuts, pending negotiations with labor leaders, but said they would run into the thousands.

The company was in negotiations with worker representatives about potential cuts at its Saarlouis plant in Germany, where 6,190 staff assemble cars, as the carmaker considers discontinuing production of its Ford C-Max model.

“We will migrate out of the MPV segment,” Armstrong said, referring to the family vans segment.

The company is unlikely to develop next-generation diesel engines for smaller vehicles, Armstrong said, explaining that customers have been abandoning the segment more aggressively than anticipated.

Going forward Ford will seek to offer an electric or hybrid version of all its vehicles and the electrification plans are not contingent on striking a deal with Volkswagen, Armstrong said.

We will have one of the most encompassing line-ups of electrified vehicles in Europe — every #Ford nameplate from the all-new #FordFocus onwards will include either a mild-hybrid, full-hybrid, plug-in hybrid or full battery electric option. pic.twitter.com/s8hACVEdUo

The carmaker continues talks about a far-reaching alliance with Volkswagen in a deal that could increase Ford’s manufacturing scale in commercial vehicles, Armstrong said.

Volkswagen and Ford will unveil an expanded alliance during the Detroit auto show, which starts next week, that goes beyond cooperating in the area of commercial vehicles, two sources familiar with the discussions said on Wednesday.