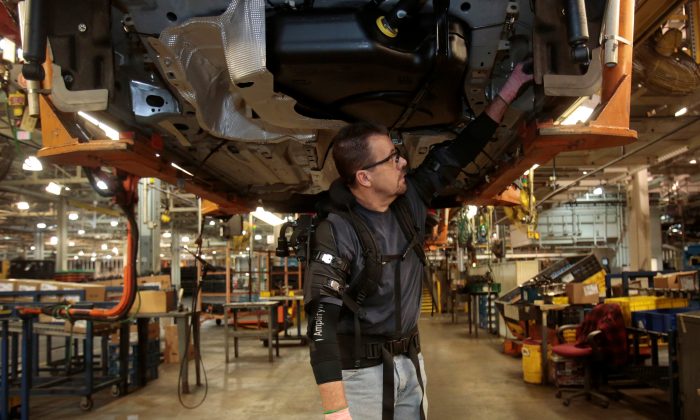 WAYNE, Mich.—Robots have replaced many U.S. manufacturing workers, but new mechanical exoskeletons being tested by Ford Motor Co may make factory workers function more like bionic people, in an effort to reduce the physical damage of millions of repetitive tasks over many years.

The U.S. automaker said on Thursday that workers at two U.S. factories are testing upper-body exoskeletons developed by Richmond, California-based EksoBionics Holdings Inc, which are designed to reduce injuries and increase productivity.

The four EksoVests were paid for by the United Auto Workers union, which represents hourly workers at Ford. The automaker plans tests for the exoskeleton in other regions including Europe and South America. The cost of the exoskeletons, which were developed as part of a partnership between Ford and Ekso, was undisclosed.

Two workers at each of the company’s Wayne and Flat Rock factories have been testing the exoskeletons since May.

The lightweight vest supports workers while they perform overhead tasks, providing lift assistance of up to 15 pounds (6.8 kg) per arm through a mechanical actuator that uses torque to take the stress off a worker’s shoulders.

If you try one on, if feels like an empty backpack, but it enables you to hold a weight such as a heavy wrench straight out in front of you indefinitely and without strain.

Ekso began by developing exoskeletons for the military and medical fields, but branched out into manufacturing and construction in 2013.

Paul “Woody” Collins, 51, a worker at Ford’s Wayne plant, has been at the automaker for 23 years and has worn an EksoVest since May. He attaches bolts and parts to the undersides of Ford Focus and C-Max models, raising his hands above his head around 1 million times a year.

Since wearing the vest, he has stopped having to put ice and heat on his neck three or four days a week and finds he has energy after work instead of feeling exhausted.

Russ Angold, Ekso’s chief technology officer, said the aim is to get workers used to the technology before moving eventually into “powered” exoskeletons that “will help with lift and carry” work.

“The idea is to demonstrate this isn’t science fiction, it’s real and it has real value,” Angold said on Thursday. “As we prove its value, we will be able to expand into other tasks.”

The No. 2 U.S. automaker has been studying for years how to lower its workers’ injury rates and the exoskeleton venture is the latest step in that process.

From 2005 to 2016, Ford recorded an 83 percent decrease in injuries or incidents that resulted in days away, work restrictions or job transfers, to a rate of 1.55 incidents per 100 full-time employees.

That is a little over half the rate of 2.9 cases per 100 workers for private employers in 2016, according to U.S. government data.

“We have made great progress, but shoulders are still our number one injury and they take a lot of time to heal,” Marty Smets, the Ford ergonomics engineer in charge of testing the exoskeletons, said on Thursday.

Collins, the Ford worker in Wayne, was supposed to wear the vest only until August, but has now asked to keep it.

“If they want it back now, they’re going to have to fight me to get it off,” he said.