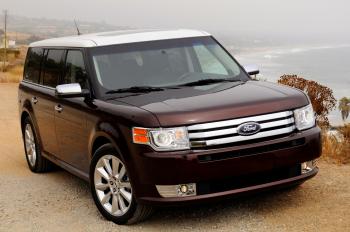 This week, at their proving grounds in Dearborn, Michigan, Ford announced the cars that will be manufactured for 2009, and made four new commitments. The press was invited to drive the cars, give their opinions about the new models, and then write about the event and the Ford-Lincoln-Mercury lineup. Drive Smart, Drive Safely, Drive Green, and Drive Quality are the areas Ford has committed to focus on for the coming year.

Featured was everything from compact, smaller vehicles like the Focus Coupe, Fusion, Escape, and Edge, to larger vehicles like the Flex, Explorer, Expedition, F-150 Truck and the 2009 E-Series. The sporty Mustang, attractive Mercury Milan, and the luxurious Lincoln MKZ, MKX, and Lincoln MKS gave the media an idea of Ford Motor’s goals for the coming year models.

Traditionally, like all auto manufacturers, Ford made a particular vehicle and then placed certain devices, accoutrements, and technologies that may be found only on that particular model. Today Ford is making some discoveries in the fields of safety and technology that will be found throughout the Ford line. Below are four inventions that will make driving a Ford safer and more convenient.

The Blind Spot Mirror: The integrated spotter mirror helps eliminate the driver’s blind spot, making lane changes, parallel parking and backing with a trailer less dangerous. This technology consists of a simple outside rearview, designed on a secondary convex spotter in the top outer corner, which is aimed at the driver’s blind spot. When an approaching vehicle enters the blind spot on either the driver or passenger side, it appears in the convex spotter, immediately alerting the driver of the pending danger.

The Cross Traffic Alert System: Working in conjunction with the blind spot information system, Cross Traffic Alert warns the driver of impending traffic while backing out of a parking spot. When cross traffic is approaching, an indicator light provides a warning in the corresponding mirror, along with an audible warning.

Safety Canopy:  The Safety Canopy side-curtain air bag rollover protection system helps protect front and rear outboard passengers in both rollover and side-impact crashes. It helps the curtain to slip between the occupant and the side window. It is designed to stay inflated for several seconds, as rollover crashes often last much longer than side-impact crashes.

Securicode Keypad: Using a five-digit code, the pad can unlock one or all doors, and illuminate puddle lamps and interior lights for a safe, more welcome entry. It is easily concealed inside the drive-side B-pillar, illuminating only at the slightest touch.

Durhl Caussey is a car writer whose columns are read around the world. He may be reached at this paper or dcaussey@sbcglobal.net .