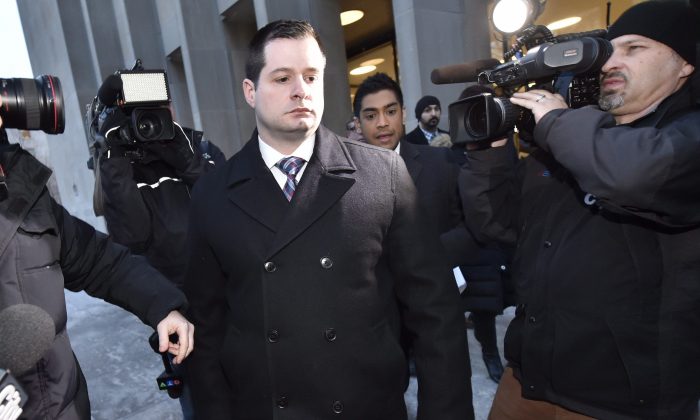 Const. James Forcillo leaves court in Toronto on Jan. 25, 2016. Forcillo has been found guilty of attempted murder in the 2013 shooting death of troubled teen Sammy Yatim on an empty streetcar. (THE CANADIAN PRESS/Nathan Denette)
Canada

Forcillo Case: Attitude Toward How Police Deal With Those in Crisis Changing

TORONTO—A guilty finding against a Toronto police officer who gunned down a knife-wielding teen on an empty streetcar suggests the public has become more sensitive toward how police deal with those in crisis, some experts say.

At the same time, they said, the prosecution of Const. James Forcillo has highlighted the need to address systemic issues around police training and the funding of mental health services.

“The public no longer has an appetite for police simply saying, ‘This is use of force’,” said Frances Jewell, executive director with the Mental Health Rights Coalition in Hamilton.

“The conversation has started but there’s a disconnect between what police are saying has changed and what has changed.”

In what has been described as a “compromise” verdict, a jury acquitted Forcillo on Jan. 25 of second-degree murder for shooting Sammy Yatim, 18, but found him guilty of attempted murder for continuing to fire after the dying teen had fallen to the floor.

Forcillo’s union warned the verdict would put officers at further risk by causing them to hesitate before responding to dangerous situations. On the other hand, the lawyer for Yatim’s family suggested too many officers have been literally getting away with murder by claiming self-defence.

Dorothy Cotton, a forensic psychologist in Kingston, Ont., said the verdict is a sign attitudes toward the mentally ill—and police accountability—have shifted.

“The significance of this whole trial is really in the fact that there was a trial and he was found guilty of anything at all,” said Cotton, who has worked with the Canadian Association of Chiefs of Police and the Mental Health Commission of Canada.

“In contrast to attitudes we had in the past toward people who appear to be crazy or out of their minds, society as a whole is saying that this is not the norm and we can’t tolerate this any more.”

Statistics Canada data show about one million interactions between police and people in some kind of mental health crisis each year. The vast majority end without serious incident. For others, however, the result is what advocates consider an unnecessary fatality as well as trauma for both the families and officers involved.