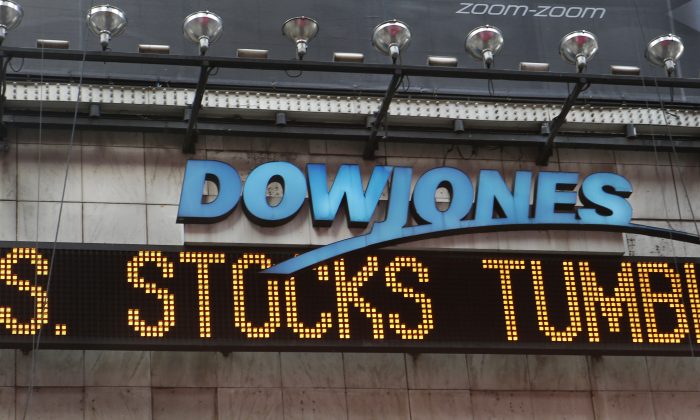 A zipper on the side of One Times Square announces a stock selloff on Wall Street in New York, Wednesday, Oct. 15, 2014. A month-long drop in US stocks intensified in afternoon trading Wednesday, sending the Dow Jones industrial average down more than 400 points and putting the index on track for its biggest loss in more than a year. (AP Photo/Kathy Willens)
Business & Markets

For Varying Groups, Stock Markets Frenzy May Help or Hurt

Yet some Americans actually stand to benefit from the forces that are driving the frenzied trading. Lower oil prices and sinking interest rates are lowering gas prices, keeping inflation low and cutting mortgage rates to levels that, for some, will scream refinance.

Stocks plunged from the start Wednesday — tumbling more than 400 points at one point — in part over fears that the weakness in Europe and Asia will cause the U.S. economy to grow more slowly than analysts and traders had expected.

A tepid report on U.S. retail sales hurt, too.

Profits of U.S. multinational companies, which have posted record increases for much of this year, would suffer from a prolonged slowdown overseas. That worry began settling over financial markets last month and has intensified since then.

Here’s how the market turmoil stands to affect different groups, from consumers to borrowers to Federal Reserve policymakers:

Most Americans won’t want to look at their retirement portfolios after Wednesday’s decline, which comes after the Dow fell nearly 5 percent over the previous six trading sessions. The Standards and Poor’s 500 stock index, in which many people sock much of their retirement savings, has sunk 7.4 percent from its mid-September high.

It may be wise to avert your eyes, if it keeps you from panicking. Most analysts counsel against selling stocks in the midst of a market drop.

“You don’t disrupt your long-term investment plan based on short-term volatility,” says Greg McBride, chief financial analyst at Bankrate.com. “If it’s anything, this is a good buying opportunity.”

Some analysts say they think that despite the troubles abroad, the U.S. economy’s expansion should continue. That, in turn, could boost stock prices over time.

“This is a pothole in the road,” said Joseph LaVorgna, chief U.S. economist at Deutsche Bank. “I don’t think the axle is going to fall off the car.”

Falling oil prices are painful for oil companies and have fanned investors’ worries about the global economy. But they’re a pretty good deal for consumers.

Oil prices have dropped nearly 25 percent since they peaked at $107 a barrel in June. Gas prices, in turn, have fallen about 60 cents a gallon since then to $3.17. Some analysts think they could drop below $3 a gallon by the end of the year for the first time since 2010.

That would leave consumers with more money to spend as the holiday shopping season begins. The boost wouldn’t be huge: McBride calculates that the 60-cent drop in gas prices would translate into an extra $50 a month for an average two-car household.

But Americans will also pay less to heat their homes this winter. The government has forecast that people who use heating oil will spend an average $362 less than last winter, thanks to lower fuel costs and the expectation of more moderate weather.

Anxiety on Wall Street has opened another opportunity for Americans to boost their cash flows: Homeowners who qualify will be able to refinance their mortgages at lower rates.

Investors seeking a haven from volatile stocks have poured money into the safety of U.S. Treasurys, thereby driving down yields. The yield on the 10-year Treasury note fell temporarily below 2 percent Wednesday from 2.2 percent Tuesday. The yield’s drop Wednesday was one of its sharpest moves in 25 years, LaVorgna noted.

Long-term mortgages typically track the yield on the 10-year note, so the yield’s drop could send mortgage rates below 4 percent for the first time this year, McBride said. For recent homebuyers or those who didn’t refinance when rates were even lower in 2013, the drop could produce a tempting opportunity.

Falling oil and gas prices are lowering inflation, which is making life harder for Fed policymakers and other global central bankers.

Consumer welcome low inflation, of course. But once prices actually start falling — a phenomenon known as deflation — wages can also fall. That makes people reluctant to spend and debts harder to pay off. Over time, deflation can contribute to a recession.

The Fed’s preferred inflation gauge rose only 1.5 percent in August from a year earlier, below its 2 percent inflation target. Falling oil prices could push it even lower.

The European Central Bank faces an even tougher challenge: Inflation in the 18 nations that use the euro currency is just 0.3 percent.

And many analysts fear that the central banks have few options to fend off deflation. The Fed’s benchmark rate has been nearly zero for six years. It is also ending a bond-purchasing program that was intended to keep long-term rates low.

LaVorgna notes that a month ago, investors obsessed over whether healthy U.S. growth would prompt the Fed to raise borrowing rates and when it would do so. Now, the market appears panicked by weakening growth and the prospect of deflation.

“The market has gone full circle,” he said.