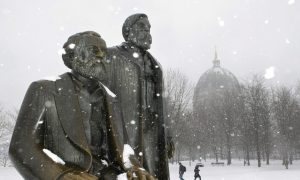 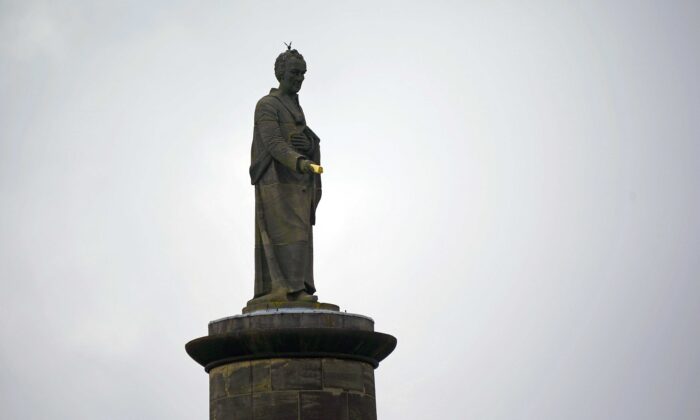 The statue of William Wilberforce is seen in Hull, UK, on June 10, 2020. (Christopher Furlong/Getty Images)
Viewpoints

For the Record: ‘Antipathy Toward Others’ Is Not a Tenet of Christianity

Over Easter, The American Catholic published a photographic illustration of just how much things can change in a single lifetime.

In the photo, enormous crosses formed by lighted windows blazed above New York’s skyline as part of the 1956 Easter display in Manhattan’s financial district. This was Easter in the year of my tenth birthday and a poignant reminder of how much the future of ordinary people can be affected by an unhinged intelligentsia dedicated to radical action in the present.

Today, in cosmopolitan Western cities, almost any civic display of religious faith, especially one of a Judeo-Christian nature, is unthinkable. Not only has the practice of religion been in decline, it has fallen into particular disrepute among our highest credentialed, progressive elites.

During the 2008 Democratic Party primary, would-be presidential candidate Barack Obama sought to link religion to violence and racism. Speaking about America’s fly-over voters he said, “And it’s not surprising then that they get bitter, they cling to guns or religion or antipathy to people who aren’t like them or anti-immigrant sentiment or anti-trade sentiment as a way to explain their frustrations.”

Some 13 years on, America’s ruling “Wokeratti” now regard any intersection of whiteness, masculinity, heterosexuality, conservatism, patriotism, or Christianity to be leading indicators of a racist disposition.

Over the course of one lifetime, young Christian men have gone from being recognized as mostly honorable “altar boys” to potentially violent hate-mongers.

Religious Resistance to Slavery and Racism

Do churchgoers belong in the “basket of deplorables” described by 2016 Democratic presidential candidate Hilary Clinton? Are practicing middle- and working-class Christians really the prime movers behind “systemic racism” in America and the West?

In fact, in the Anglo-American context, practicing Christians were at the center of campaigns to abolish slavery and racial discrimination from the 18th through the 20th century.

Although many Enlightenment philosophers opposed slavery, it was Christian activists, with strong religious convictions, who initiated and organized the abolitionist movement. Abolitionists found ways to use the Bible and Christian tradition, along with Anglo-American civic ideals, to make a persuasive case against slavery.

Throughout the British Empire and the United States, Christian faith leaders were at the forefront of abolitionist and civil rights movements. It was the evangelical Christian parliamentarian William Wilberforce who campaigned tirelessly for the abolition of the slave trade in early 19th century Britain. Wilberforce wrote in his diary that “God Almighty has set before me two great objects, the suppression of the Slave Trade and Reformation of Morals.”

In mid-20th century America, it was an African American Baptist minister, Martin Luther King, who became the moral leader of the U.S. civil rights movement. Inspired by his Christian belief, King advanced civil rights through non-violent civil disobedience and the religious principle that all men are equal before God.

Fair-minded scholars acknowledge that the greatest common denominator among those who fought against racial injustice was a “fundamental” grounding in the Judeo-Christian heritage.

Unintended Consequences of ‘Following the Science’

Religious history has seen its share of witch-hunts and inquisitions, but the moral fallout from scientific advances has also been less than perfect. Slavishly “following the science” as U.S. President Joe Biden continues to recommend, has been known to produce many unintended consequences.

In fact, it’s fair to suggest that racism, as well as other ungodly human pathologies, have also been generated by the misguided application of “scientific conclusions.”

For example, modern assaults on human equality are more attributable to a particular school of anthropological biology than to any form of religious practice. In the case of racism, the historical record points directly toward the Darwinian theory of the “survival of the fittest” and its early 20th century influence on the “science” of eugenics.

Eugenics was an “applied science” primarily inspired by Charles Darwin’s 19th century empirical investigation of “The Origin of Species” and “The Descent of Man.” By the early 20th century the idea that eugenics might be applied to the improvement of human beings in the same way that selective breeding is applied to farm animals almost achieved the status of “settled science.”

The idea that society could be improved by producing more perfect human specimens found considerable favor among many who considered themselves to be “progressive” thinkers. “Following the science” took us to some very dark places.

Karl Marx and Friedrich Engels recognized that the replacement of a religious outlook with Darwinian “scientific analysis” provided a basis in natural science for their idea of class struggle and revolutionary violence.

Later in the 20th century the German National Socialist movement, led by Adolf Hitler, extended the implications of Darwin’s “Descent” to their quest for the development of a “master race.” German intellectuals picked up on the idea that nature favors the strong. Unrestrained by religious morality, they sought extraordinary means, including mass murder, to eliminate people they deemed to be inferior. This was the “science” of eugenics in action.

The Birth of Relativism

At about the same time that Darwin’s theory was capturing the imagination of anti-religious intellectuals, a little-known 26-year-old, Jewish patent office clerk by the name of Albert Einstein came up with a scientific discovery challenging the framework for human knowledge that had been around since the era of Galileo.

Einstein’s Special Theory of Relativity, the proposition that space and time are “relative” rather than “absolute” terms of measurement, followed by his demonstration that all mass has energy (E=MC²), led to the modern development of nuclear energy.

Once again, however, blindly following the science produced unintended consequences. Unfortunately, Einstein’s discovery started the military race for the development of nuclear weapons.

Tragically, “Relativity” became confused with “Relativism” a form of cultural dictatorship that recognizes no universal morality and views individual whim as the ultimate and only measure of value or truth.

The invocation of “science” in support of a relativistic, neo-Marxist mega-narrative has continued apace in the “Woke” culture of the 21st century.

Invoking the familiar Woke assertion that white people are “systemically racist” whether they know it or not, Walensky claimed that “racism” is a “serious threat to public health” in the United States.

News outlets reported that the CDC is launching a new web portal, “Racism and Health,” which will serve as a catalyst for public discourse on the topic. The agency has also produced an interactive map showing more than 170 municipalities that have declared racism a public health crisis or emergency.

Why don’t more ordinary people warm up to such pronouncements? Perhaps because they intuitively understand that science and social engineering do not solve moral dilemmas.

With all due respect to the managerial acumen of the CDC director and the analytical powers of the Woke medical science community, it might be useful to explore other paths toward the eradication of racism in Western society.

Science, in itself, has shown a limited capacity to eradicate human wickedness. Christians, on the other hand, have waged epic battles against slavery, racism, relativism, and other forms of human pathology.

With this in mind, administrative authorities might want to consider placing a little higher priority on the task of reopening our churches.