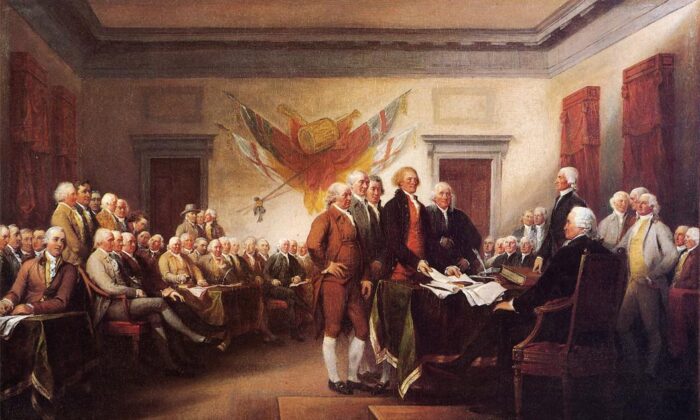 At National Public Radio, the document that effectively created the United States is out.

Predictably, this year the left-wing media churned out a drumbeat of pieces about why Independence Day isn’t so great for one reason or another.

It’s an annual tradition, so no surprise.

The Left had a bad month at the Supreme Court, so now we have to hear about how democracy is over and America is doomed.

This year’s popular gripe was that the Supreme Court’s decision in Dobbs v. Jackson Women’s Health Organization, overturning Roe v. Wade, is reason to stop celebrating America. Now that Americans can choose to limit or prohibit abortion, the Fourth of July deserved to be canceled.

It seems that for some of our countrymen, patriotism stems from always getting your way.

If left-wing publications want to go with this message, that’s fine. At least we know where they stand. But why is it coming from national, publicly funded media?

National Public Radio, or NPR, had a long-standing tradition in which hosts read the Declaration of Independence every Fourth of July. NPR kept this going for 33 years, until this Independence Day.

This July 4th we break with tradition. Instead of a reading of the Declaration of Independence @NPRinskeep examines what equality means and has meant in this document. Important segment about our past and future…produced by @marcarivers and @bgordemer https://t.co/MxlgNaWpC1

In 2022, NPR instead opted for a commentary segment on the “Morning Edition” show to talk about “equality.” This ended up being mostly a discussion about racism and the end of Roe v. Wade, and included an obligatory shot at Republicans.

“Many of our debates on this July Fourth turn on what equality means. What voting rules really give equal access to the ballot. Do abortion laws give a woman equal control of her body? At what point is a fetus entitled to equal rights?” NPR host Steve Inskeep said.

“For some people, equality is out of style,” Inskeep said. “Some political progressives prefer the term ‘equity.’ Some Republicans in Texas and Colorado have called for unequal voting power, giving more weight to conservative voters. The global move toward authoritarian rule opposes equality, asserting that some people are more equal than others.”

And on it went.

The truth is, the Declaration of Independence was hanging on by a thread at National Public Radio. Last year, NPR did the reading, but also issued a long list of apologies for why America was racist, sexist, bigoted, and hypocritical. Happy Fourth of July!

If NPR just wants to add to the bland noise of countless other generic liberal media organizations on its own dime, then fine. It’s a free country, thanks to the Declaration of Independence and 1776 and all that problematic stuff.

But unlike a New York Times or Washington Post, NPR brings in taxpayer dollars. Some from the federal government, some from states and localities. Congress recently approved a $525 million budget for the Corporation for Public Broadcasting for fiscal year 2023.

Sure, taxpayer funding is far from all of NPR’s budget, but it’s still a significant amount of money. Why does the gravy train continue when its programming has become so absurd and one-sided?

If NPR is to get public funds, this “national” media organization at least should make some attempt to appeal to a national audience. Right?

It doesn’t bother in the slightest.

Instead, NPR now feeds listeners with a steady stream of woke farce.

As National Review writer Dan McLaughlin noted on Twitter, it seems National Public Radio really wants to remove the “national” from its title while keeping the “public.”

NPR against the N, but still wants the P. https://t.co/oG7c5MwP6o

In 2021, NPR gave the green light to its reporters to engage in direct activism. It has complained about conservative websites covering issues that serve conservative causes while committing to round-the-clock programming obsessively focused on race and gender.

Some of this new programming is downright, unintentionally hilarious. NPR did a segment about decolonizing fitness. It recently ran a piece about how Americans can “cope” with hearing stories about the war in Ukraine.

Shows such as “Car Talk” are becoming a thing of the past.

Even with this woke turn, it still wasn’t good enough for NPR’s most zealous employees, who essentially have accused the media organization of being racist. Who could have predicted that?

The more money and programming NPR devotes to stopping racism, the more racism it finds.

Unfortunately, the joke is on us, because Congress keeps underwriting this nonsense. Maybe one day Congress will do us a favor and declare our independence from NPR.