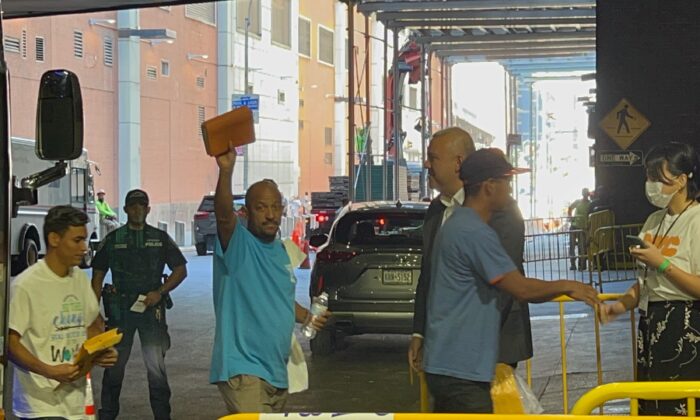 For Illegal Border Crossers Bused From Texas to NYC, Some Stay, Some Leave

NEW YORK—Some illegal border crossers bused from Texas to New York City are staying in The Big Apple, while others are moving elsewhere.

The Port Authority bus terminal is the main arrival point for the illegal immigrants transported to the city on buses by Texas authorities.

Manuel Castro, the commissioner of the NYC Mayor’s Office of Immigrant Affairs, personally greets some illegal immigrants upon arrival.

Castro’s office set up a private area in the bus terminal to distribute food, clothes, and hygiene goods to the immigrants. Even though the illegal immigrants are open to talking to the press, the Mayor’s office employees keep a close watch on the area and block interview attempts.

Jose Martinez, 25, a Venezuelan who lived in Peru, said he went through Ecuador, Colombia, the jungle, and Panama before he reached the U.S. border in Texas.

When he arrived in New York City on Aug. 27, MOIA placed him in a male shelter in Brooklyn. But he left the next day in Washington, saying conditions in the shelter were dangerous.

“There was a lot of drug trafficking,” he told The Epoch Times.

In Washington, he has a friend who he said will help him find work. Martinez has a child in Peru and wants to provide for her.

Another illegal immigrant on the same bus, Jose Juan, 23, from Venezuela, came to the U.S. for a better life. He left New York City for Chicago but was still undecided about where to settle. “I want to have a job, whatever that might be,” Juan told The Epoch Times.

Illegal immigrants in front of the men’s Atlantic Armory shelter in Brooklyn said the shelter conditions are reasonable compared to those in socialist Venezuela. To some, getting to Texas from their homeland took a month or two.

The shelter has a strict schedule, they said. Those who arrive after 11 p.m. cannot sleep in a bed. However, illegal immigrants are happy to be alive after the arduous journey to the United States. On the track to the border, many die of heat, snake bites, and other perils.

Daniel, 22, said he witnessed a mother who lost her child crossing a river. Daniel said only immigrants with money could take public transportation to the U.S. border. Otherwise, they must ride a “train of death” called “the beast.” They recalled that people stay on top of the train for up to 12 hours. Some die because they fall during the long trip.

“We want to make some money to buy a house and a car in our country, to provide for our families,” some illegal immigrants told The Epoch Times.

One said that in Venezuela, they earn a maximum of $15 per week.

“America is truly the land of opportunity,” he added.

At the shelter are all kinds of people, and drug trafficking is widespread, said an employee at the Atlantic Armory. He added that new Latino illegal immigrants are young and cannot stand the rough life in the shelter for a long time.

Earlier this month, New York Post reported that Mayor Eric Adams and the city Department of Homeless Services are working on a contract to transform part of the famous Row hotel in Times Square into a shelter for illegal immigrants.

“Currently, we are not working with the City of New York, nor is there any contract signed, to house any migrant families at Row NYC now or in the future,” said Maurizio Bonivento, the general manager of Row hotel, in an email to The Epoch Times.