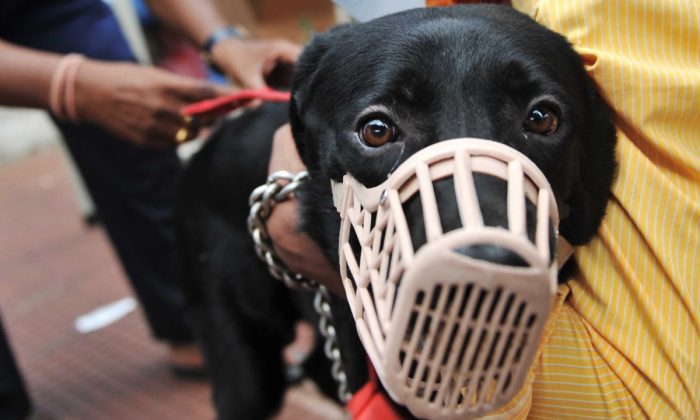 Stock footage of a Labrador in a muzzle. (NOAH SEELAM/AFP/Getty Images)
Social Issues

Fortunately, the only injury that the boy suffered was a scuffed knee.

The chase happened in Guangdong province, China, on Feb. 26, and was first reported on April 20. The police of Shenzhen city gave multiple warnings to the dog owner, and are now investigating recent complaints, according to multiple Chinese media outlets.

Dogs in China often must be leashed or muzzled, but some owners do not obey.

The Dogs Were Allowed to Run Off the Elevator

The footage revealed a nine-year-old boy waiting at the elevator in the hallway of his condominium high-rise.

As the doors of the right-side elevator begin the open, the boy gets ready to step on. He immediately backs up as he sees the dogs inside. The boy was quite afraid of dogs, according KNews, a major short-video news outlet in China.

The boy immediately runs back in terror toward his father, who was parking their car, while three of the four dogs run after him.

The dog’s owner walks leisurely behind them, with the fourth dog following him.

The boy’s father, surnamed Song, said that after the boy fell to the ground, the dogs didn’t bite.

“Those several dogs stepped on him a few times and then walked off,” Song said to Pear Videos, a major short-video news network in China.

“I always put leashes on my dogs,” the unnamed owner told Pear Videos. “I had drunk a little bit of alcohol, and I had the leashes on the dogs when we get onto the elevator.”

The owner said he took off the dog’s leashes while on the elevator. “I thought we were at the fifth floor, but the elevator went back down to the first floor,” the owner said.

“Those dang dogs, when they see something moving, they just want to chase it.”

The incident was resolved between the owner and the father.

“[The owner] apologized to me, and said he’d make sure the dogs are leashed next time,” Song said.

The owner has registration for the dogs as well as vaccination, according to a police official who spoke with Pear Videos.

Several complaints since then have been made against the owner, and the police have let him off with a warning each time, according to local media. Complaints in April toward the owner included walking the dogs without a leash and barking.