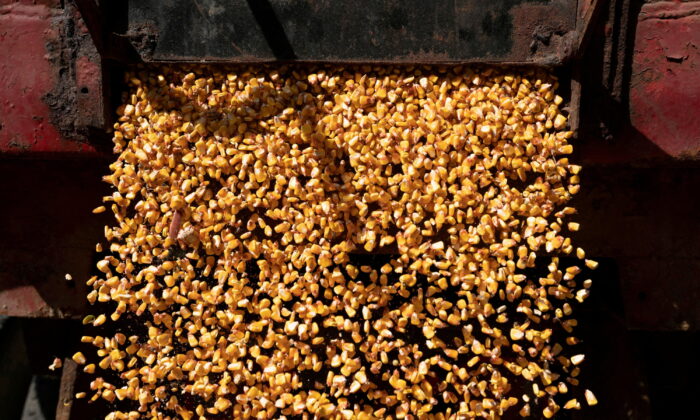 A load of corn is poured from a truck into a grain silo on a family farm in Ravenna, Ohio on Oct. 11, 2021. (Dane Rhys/Reuters)
Gold and Commodities

The Food and Agriculture Organization’s (FAO) food price index, which tracks the most globally traded food commodities, averaged 140.9 points last month versus a revised 154.3 for June. The June figure was previously put at 154.2.

The July index was still 13.1 percent higher than a year earlier, pushed up by the impact of the invasion of Ukraine, adverse weather, and high production and transport costs.

The vegetable oil, sugar, dairy, meat, and cereal price indices all fell month-on-month in July, with wheat slumping 14.5 percent, partly due to a deal reached between Ukraine, Russia, Turkey, and the United Nations to unblock grains exports from Black Sea ports.

The maize price index fell 10.7 percent in July, also due in part to the Russia-Ukraine deal as well as increased seasonal availability from key producers Argentina and Brazil, the FAO said.