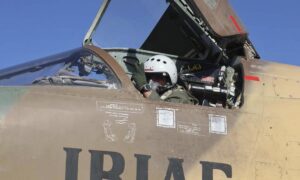 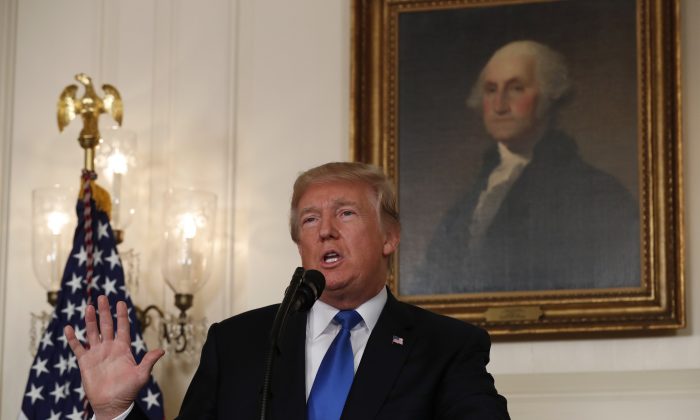 President Donald Trump speaks about the Iran nuclear deal in the Diplomatic Room of the White House in Washington on Oct. 13, 2017. (Reuters/Kevin Lamarque)
Middle East

The Iranian regime is one of the world’s leading sponsors of terrorism. It fuels sectarian violence in the Muslim world, has pushed to develop nuclear weapons, and regularly calls for the deaths of Israel and the United States.

The Obama administration signed a deal with Iran in 2015 to pay Iran more than $1.7 billion and delay its development of nuclear weapons until 2026. Despite this, Iran has continued its hostilities toward the United States, continued to finance terrorism, and continued to interfere with inspections of its nuclear sites. In January 2016, Iran took 10 U.S. sailors hostage and violated international norms in showing pictures of them.

In August 2016, the State Department revealed that the Obama administration also paid $400 million to Iran as part of a deal for the release of four U.S. hostages.

President Donald Trump denounced the Iran deal during an Oct. 16 speech. He said, “This nation has been taken advantage of for many, many years—for many decades, frankly—and I’m tired of watching it.”

Days earlier, on Oct. 13, Trump announced he would not recertify the Iran deal, but also said he would not abandon it entirely. As part of a new strategy, he laid out new actions to rein in the threats from Iran.

Trump said not certifying the Iran deal was “something that I felt had to be done,” and said “phase two” of his decision is still being determined and might end in the “total termination” of the deal. “We’ll see what happens,” he said.

Trump noted that following his announcement, Iran’s leaders began changing their tone, though he was aware that “they’re great negotiators” and their sudden shift may not be genuine. He said, “They negotiated a phenomenal deal for themselves but a horrible deal for the United States, and we’re going to see what happens.”

The Trump administration issued a new strategy on Iran on Oct. 13. An outline of the plan states it will neutralize Iran’s efforts to destabilize other nations and constrain its aggression, “particularly its support for terrorism and militants.” The United States will “revitalize” its alliances to build “bulwarks against Iranian subversion,” will expose Iran’s operations, and will also deny funding to Iran’s Islamic Revolutionary Guard Corps. (IRGC), which it uses for terror and subversion.

The new strategy will also counter Iran’s threats of attack from ballistic missiles and other weapons and will “deny the Iranian regime all paths to a nuclear weapon.”

Iran has been under the control of its “Supreme Leader,” Ali Khamenei, for 28 years, and according to the strategy on Iran—which was formed through nine months of meetings with Congress and U.S. allies—”Khamenei and the IRGC have pursued a steady policy of spreading a revolutionary ideology aimed at undermining the international system and many states by force and subversion.”

The report notes that in addition to exporting violence and terrorism, and spreading hatred toward the United States and Israel, Iran runs an authoritarian regime that oppresses the Iranian people and heavily restricts their rights.

Israeli Prime Minister Benjamin Netanyahu applauded Trump’s new strategy on Iran, saying in a statement that had things been left unchanged, “in a few years’ time, the world’s foremost terrorist regime [would] have [had] an arsenal of nuclear weapons, and that’s tremendous danger for our collective future.”

Ahead of the decision, the National Council of Resistance, an Iranian group that opposes the Iranian regime, said in a report that Iran had secretly continued to develop nuclear weapons, despite its deal with the Obama administration. It states, “Many aspects of this operation have been kept hidden by The Islamic Revolutionary Guards Corp. (IRGC) from the prying eyes of both the world and the United Nations.”

When Trump announced the strategy on Oct. 13, he noted that “our policy is based on a clear-eyed assessment of the Iranian dictatorship, its sponsorship of terrorism, and its continuing aggression in the Middle East and all around the world.”

“Iran is under the control of a fanatical regime that seized power in 1979 and forced a proud people to submit to its extremist rule,” Trump said. “This radical regime has raided the wealth of one of the world’s oldest and most vibrant nations, and spread death, destruction, and chaos all around the globe.”

Trump said that former sanctions against Iran had significantly weakened it, “but the previous administration lifted these sanctions, just before what would have been the total collapse of the Iranian regime, through the deeply controversial 2015 nuclear deal with Iran.”

The deal gave Iran a $1.7 billion cash settlement and an immediate financial boost of over $100 billion. Trump said, “The saddest part of the deal for the United States is that all of the money was paid up front, which is unheard of, rather than at the end of the deal when they have shown they’ve played by the rules.

“But what’s done is done, and that’s why we are where we are.”