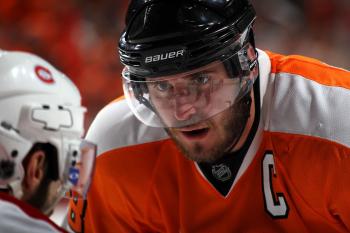 The Chicago Blackhawks and Philadelphia Flyers matchup in the Stanley Cup final should provide the NHL with a highly competitive series featuring a great matchup between two outstanding young captains.

Flyers captain Mike Richards has had some quiet moments in the playoffs but in Game 5 against Montreal, he showed his leadership qualities. Richards is a physical, two-way forward who excels on the penalty kill and can score.

Richards is second in playoff scoring with 21 points in 17 games. He plays like the second coming of Bobby Clarke, who led the Flyers to their last Stanley Cup win in 1975.

Richards’s Canadian Olympic line mate Jonathan Toews is a leader in every sense of the word for the Blackhawks. He plays the big minutes, delivers the goods under pressure, and has recorded 26 points in 16 games so far these playoffs to lead all playoff scorers.

Of the original six NHL teams, the Detroit Red Wings have had the most recent success, winning four Cups in the last 12 years. The Montreal Canadiens, hockey’s most successful franchise, last won a Cup in 1993, the New York Rangers in 1994, the Boston Bruins in 1972, and the Toronto Maple Leafs in 1967.


That Cup in 1961 broke a string of five straight Cups by the Montreal Canadiens, the longest string of Cups in NHL history. Prior to that 1961 Cup, the Blackhawks owned the longest Cup drought, not having won one since 1938.

The Blackhawks, who are the least successful of original six NHL franchises, wracked up 112 points in the regular season to finish third overall (behind Washington at 121 and San Jose at 113). Their opponents, the Philadelphia Flyers barely made the playoffs with 88 points. But these facts are completely meaningless now.

What teams accomplish in the regular season doesn’t always translate into what transpires in the playoffs.


Backup Goalies
This Stanley Cup final series hinges on the performance of Michael Leighton for the Flyers.

Oddly enough, Leighton’s longest NHL stint came with the Blackhawks during the 2003–2004 season when he played in 34 games. Filling in for Brian Boucher in the playoffs, Leighton blanked the Montreal Canadiens three times in the Easter Conference finals.

But Leighton will be facing a much more balanced attack from Chicago than they did from Montreal. Chicago has four players with seven or more goals in the playoffs including 257-pound Dustin “Big Buff” Byfuglien who will be spending a lot of time in front of his net while watched closely by Flyers shut-down defenseman Chris Pronger.

Leighton's counterpart with Chicago, Antti Niemi, though undrafted and also relatively inexperienced, has played all but 20 minutes of Chicago’s playoffs. He has gotten the job done and also has a stronger supporting cast in front of him. More importantly, he has been playing at a high level for a longer stretch than Leighton has.

Niemi and the Blackhawks are well prepared for attackers going to the net, as the Flyers are more than capable of doing. After battling past Vancouver in six games and sweeping San Jose, Chicago’s defense led by Canadian Duncan Keith has been terrific at both ends of the ice.

Both teams have a good sniper in their arsenal. Buffalo native Patrick Kane, who represented the United States at the Olympics, is extremely quick and explosive. The Flyers have big power forward Jeff Carter, who scored 46 regular season goals last year. Carter’s return from injury gave the Flyers an additional boost to get past Montreal.

While Chicago has to be the favorite, you can’t count Philadelphia out. Philadelphia accomplished something only two other NHL teams did, namely winning a seven-game series after losing the first three games. One could argue that they are a team of destiny.

That emotional boost after shocking Boston in the Eastern Conference semifinals helped Philly get an early jump on Montreal. But now, with both teams very well rested, things begin at zero with no advantages to anybody.

The Blackhawks have the speed advantage but the Flyers dealt very well with the speed of the Canadiens. The Flyers play a physical brand of hockey, which the Hawks have handled well from teams like Vancouver and San Jose.

This series will do the NHL more good in terms of bringing exciting and competitive hockey. Look for a series to go six or even seven games and don’t be surprised if the Flyers can pull off another upset and extend the Blackhawks drought.