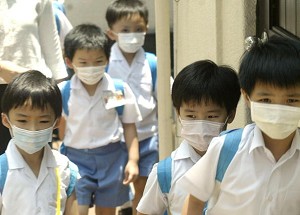 HONG KONG—More than half a million Hong Kong schoolchildren stayed at home on Thursday after the government shut all kindergartens and primary schools for two weeks to contain an outbreak of flu.

A government-appointed panel of experts is investigating the deaths of three children, aged 2, 3 and 7, over the last two weeks. All three had flu-like symptoms.

The health scare is not linked to bird flu in the former British colony where 21 birds were detected with the H5N1 virus last year.

But the government's decision on Wednesday night to close the schools brought back memories of 2003, when an outbreak of Severe Acute Respiratory Syndrome hit Hong Kong.

Experts say there was no reason to panic.

“This year, there seem to be slightly more flu cases. But from what I can see, we get a bad flu year every few years. I don't think it is very unusual or different from previous years,” said Leo Poon, a virologist from the University of Hong Kong.

“As to whether these strains may be more severe, we have to sequence (analyse) them to see if there are any changes.”