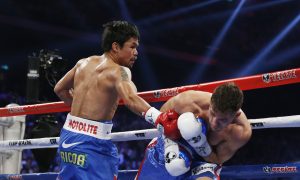 Floyd Mayweather Shows Off Cars But Manny Pacquiao Not Impressed

Floyd Mayweather has, as usual, been showing off his wealth with pictures of possessions such as luxury cars and a jet, but his potential opponent Manny Pacquiao is not impressed.

Floyd posted a picture of himself standing in front of eight cars and the jet on Twitter, saying “Welcome to my world.”

The Daily Mail says that the cars alone are worth $4 million.

“Floyd brags about his lifestyle and everything! I don’t care! I’m just waiting here for him to sign the contract! #fightpacquiao,” Pacman said, posting an Instagram picture of himself next to a bonfire in modest surroundings.

Pacquiao and Mayweather and their teams have been negotiating seriously for some time now, but a bout still isn’t locked in.

They both typically fight twice per year–once in or near May and once in the later part, such as September and November, respectively, in 2014.

Floyd brags about his lifestyle and everything! I don’t care! I’m just waiting here for him to sign the contract! #fightpacquiao

Pacquiao has been continually trying to provoke Mayweather. For instance, he posted on Twitter just before the New Year–“The ball will drop at midnight to usher in 2015. @FloydMayweather let’s not drop the ball on fighting each other next year!”

Fortunately, the fight by many accounts will happen, if not the early part of this year.

Oscar De La Hoya has made peace with rival Bob Arum, Pacquiao’s promoter and Mayweather’s former promoter, and the pair are trying to hammer the negotiations into a final agreement, reported the Mail.

The pair do have other items on the agenda, including the spring fight between Canelo Alvarez and Miguel Cotto.

There’s a lot at stake for the Pacquiao-Mayweather bout, including lots of money, as the bout is predicted to bring in the most money in the history of the sport.