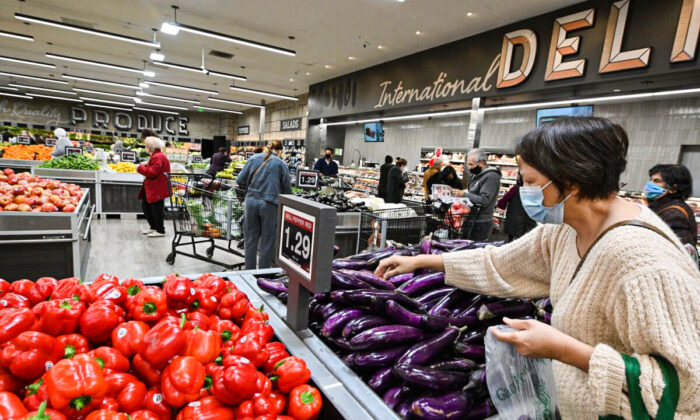 People shop for groceries at a supermarket in Glendale, Calif., on Jan. 12, 2022. (Robyn Beck/AFP/Getty Images)
Economy

Floridians are cutting back on food spending as well as nonessential items amid recent price hikes and surging inflation, according to the latest statewide survey from the Florida Atlantic University Business and Economics Polling Initiative (FAU BEPI).

The online survey was conducted May 20–22 with over 530 respondents in the Sunshine State, FAU BEPI said.

Results showed that more than 70 percent of respondents said they are cutting back on spending on travel and entertainment, while about 66 percent are buying less food.

Nearly 60 percent said they are turning to their savings to pay for bills while almost four in 10 said they are missing bill payments amid increasing price hikes.

Elsewhere, roughly 47 percent of respondents rate the national economy as poor or very poor, while 84 percent consider the cost of living and inflation a high priority that the country must address.

More than eight out of 10 of those surveyed said they are either concerned or very concerned about increasing costs for both housing and property insurance, while more than 53 percent said rising prices for food and goods and services have “greatly affected their finances.”

“This increase in prices in the travel industry will lead to adjustments in summer vacation plans,” said Monica Escaleras, Ph.D., director of the university’s polling initiative. “The hospitality industry most likely will see a decrease in demand.”

The survey comes as inflation in the United States is at 8.3 percent in May 2022, having reached a 41-year high of 8.5 percent in March.

Economists have warned that the U.S. economy could be heading into recession in the next 12 to 24 months.

But President Joe Biden’s top economic adviser played down that risk in an interview with “Fox News Sunday” on May 22, stating that the economy is merely in a “period of transition” of COVID-19 recovery.

National Economic Council Director Brian Deese said, “We’re moving from the strongest economic recovery in modern history to what can be a period of more stable and resilient growth.

“And while there are absolutely risks with inflation at front and first and foremost, this is what is most important: The United States is positioned better than any other major economy to bring inflation down and address these challenges without giving up all of the economic gains we’ve made, and that’s because of the strength of our recovery. We have the strongest job market in modern history,” Deese said.

When questioned over whether Americans should be prepared for country to enter a recession, the White House economic adviser said that people should “also take confidence that we are better positioned than any other country to navigate through this and keep our recovery going.”

However, Alan Blinder, former Federal Reserve vice chair, said during a May 23 program titled “CNBC Special: Inflation and Your Stocks” that the chance of a recession is “pretty likely,” although the former Fed official noted that he does not foresee such a downturn happening until next year, in which case it would be mild.

A recent Bloomberg survey of economists conducted May 6 to May 11 found that the probability of a recession over the next 12 months is 30 percent, the highest in two years.