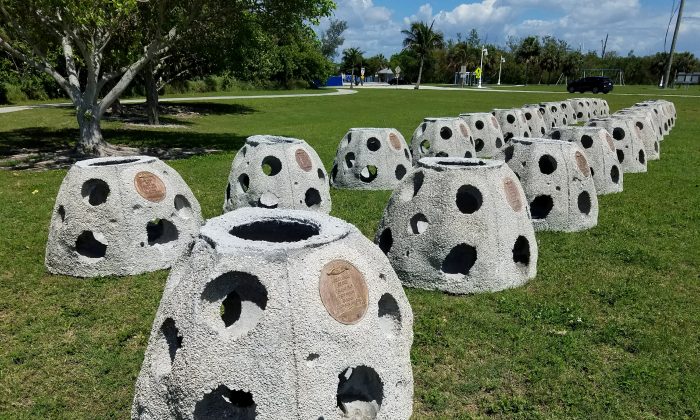 Some of the 66 Eternal Reef balls with plaques representing each of the submarines and crewmembers lost at sea since 1900, which will be deployed to the ocean floor for the undersea memorial during a ceremony this Memorial Day weekend, off the coast of Sarasota, Florida U.S., May 23, 2018. Brian Dombrowski/EternalReefs.com/Handout via Reuters/File Photo)
US News

Almost exactly 50 years ago, the USS Scorpion became the last U.S. submarine to be lost at sea when it disappeared while on patrol in the North Atlantic in 1968, with the nearly 100 officers and crew lost and presumed killed.

This weekend, those who went down with the Scorpion—and nearly 4,000 others lost in dozens of U.S. submarines that have sunk or gone missing since 1900—will be honored.

A ceremony will be held on Sunday at a park in Sarasota, Florida to dedicate the first-ever undersea memorial for U.S. submarines lost at sea and the men who gave their lives while serving aboard them.

A gathering of small watercraft at the site nine miles (14 km) off the Gulf Coast that was planned for Monday, Memorial Day, was postponed due to an approaching storm.

The On Eternal Patrol Memorial Reef will eventually consist of 66 concrete “reef balls,” one for each of the 65 U.S. submarines lost in battle or during peacetime, plus one in honor of submariners lost in non-sinking accidents. The 1,300-pound concrete globes, resembling giant whiffleballs, will sit on the ocean floor at a depth of 45 feet (14 meters) to form an artificial reef that will attract a rich array of marine life.

“Submariners who die go on eternal patrol,” said Navy veteran J. Al Smith, 89, in explaining the name of the memorial.

Eternal Reefs Inc., a non-profit organization dedicated to protecting the undersea environment, is due to complete the project by the end of the summer, said spokeswoman Becky Peterson.

“I think it’s great,” Smith said about the memorial’s location. “That’s where we submariners lived—under the water.”

Smith was a 20-year-old 2nd-class gunner’s mate when his submarine, the USS Cochino, was lost in North Atlantic waters off Norway’s coast in August 1949, the early days of the Cold War.

The sinking of the Cochino took the life of a civilian engineer onboard to train the military to use reconnaissance equipment, according to the book “Blind Man’s Bluff: The Untold Story of American Submarine Espionage,” by authors Sherry Sontag and Christopher Drew. All 76 military personnel aboard survived.

The Navy did not immediately respond to a request for comment about the incident.

Decades later, Smith has vivid memories of what he called a “nerve-wracking” day.

“All of a sudden I heard the alarm and the captain ordered people out,” he said, recalling the scramble to the surface amid 10-foot waves, near gale-force winds and freezing temperatures.

“About 50 of us only had skivvies on because we had to get out so fast. We were getting wet and freezing to death. Scary? Hah—you have to go through it to understand,” Smith said.

A nearby submarine, USS Tusk, came to the rescue, losing six of its crewmen in the effort. As soon as the last man on the stricken submarine—Cmdr. Rafael Benitez—stepped on the Tusk’s deck, the Cochino submerged completely, never to be seen again.