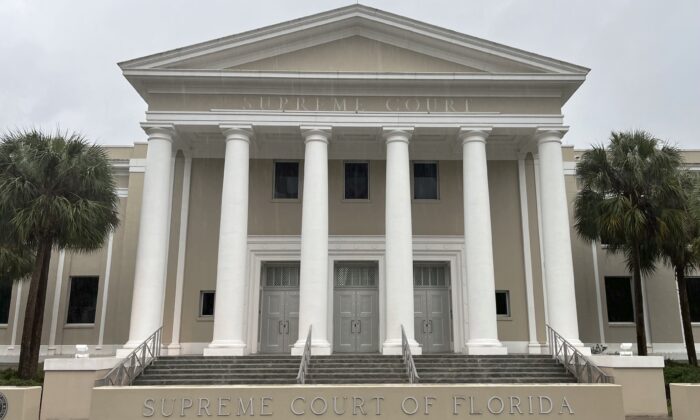 The Florida Supreme Court has agreed to hear arguments against the state’s 15-week abortion ban, a decision that comes as Florida’s lawmakers are likely to discuss further restrictions on abortions in the 2023 legislative session.

HB5 has been challenged by Planned Parenthood, American Civil Liberties Union (ACLU), and other abortion providers, arguing that the state’s Constitution protects the right to abortion.

On Monday, the court declined to immediately block HB5 while the lawsuit proceeds, thereby leaving the 15-week abortion ban in place. However, it accepted the plaintiffs’ request to hear their arguments in the case against HB5. The court will now schedule oral arguments through a separate order.

“While we are pleased that the court didn’t shut its doors completely, we are dismayed that it has allowed this dangerous ban to remain in effect and to harm real people each and every day until this case is finally decided,” Whitney White, staff attorney for ACLU’s Reproductive Freedom Project, said in a Jan. 23 statement.

HB5 was passed in March 2022 and signed into law in April the same year.

HB5 reduced the legal time limit for abortion to 14 weeks from the earlier 24 weeks, providing no exemption for incest or rape. The law came into effect on July 1, 2022.

The lawsuit against the 15-week ban was filed in June last year. On July 5, a circuit court judge issued a temporary injunction, stating that the implementation of HB5 would be blocked, citing a 1989 Supreme Court ruling that the state’s privacy laws protect abortion. Florida appealed the ruling.

In August, the 1st District Court of Appeal blocked the circuit court ruling, keeping the 15-week abortion ban in effect. Plaintiffs in the case asked the Florida Supreme Court to block the law, which was denied on Jan. 23 in a 4–1 decision.

DeSantis has expressed willingness to expand abortion restrictions but has not indicated what measures he plans to include. During the 2023 legislative session, lawmakers are expected to take up the abortion issue for discussion.

Senate President Kathleen Passidomo, a Republican, is pushing for reducing the abortion time limit from 15 weeks to 12 weeks, but with exceptions for incest and rape.

According to a report from the U.S. Centers for Disease Control and Prevention, Florida registered roughly 72,000 abortions in 2019, of which around 2 percent were performed when the fetus was 14 weeks or older.

The Florida Supreme Court’s decision comes as Vice President Kamala Harris delivered a speech in Florida on Jan. 22, announcing that the Biden administration is committed to increasing access to abortion.

Harris blamed the U.S. Supreme Court for stealing women’s “fundamental right” to abortion when it overturned Roe v. Wade in June last year. In an interview with The Epoch Times, Mark Minck, the state chairman of Protect Human Life Florida, said that Harris’s visit to the state was significant given its timing.

“I don’t think it’s a coincidence,” he said prior to Harris’s visit. “She could be in any one of 50 states. And she’s going to be in Florida on the 50th anniversary of the now-infamous Roe v. Wade decision. And Florida, sadly enough, is already third in the nation in the number of abortion deaths each year behind California and New York.”