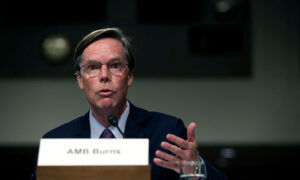 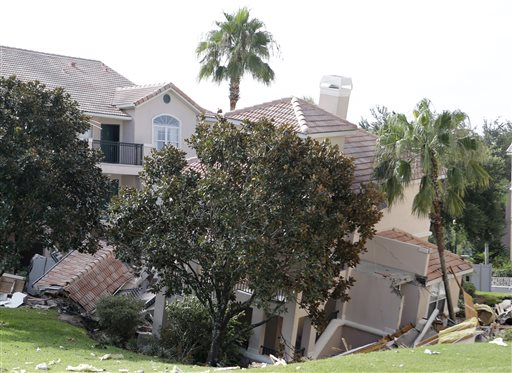 A portion of a building rests in a sinkhole Monday, Aug. 12, 2013 in Clermont, Fla. The sinkhole, 40 to 50 feet in diameter, opened up overnight and damaged three buildings at the Summer Bay Resort. (AP Photo/John Raoux)
US

A sinkhole near DisneyWorld in Florida is swallowing homes early Monday morning.

A second building followed a first, collapsing into the hole, reported Siaina Campell, a local resident.

“The other building came down!” She tweeted.

Myrt Price of WFTV said that he talked with a woman who was inside the first building when it collapsed and she and her family were asleep and had to rush out when it started collapsing into the hole.

The two buildings are joined by an elevator and a breezeway, reports Sheli Muniz, a reporter with WKMG-TV.

The Summer Bay Resort is about 10 miles west of Disney World.

By early Monday, nearly a third of the structure at Summer Bay Resort had collapsed. All 105 guests staying in the villa were evacuated, as were those in the neighboring buildings. No injuries were reported. The villa, with 24 three-story units, was reported as a total loss, and inspectors remained on the scene Monday afternoon to determine whether the other two buildings near the sinkhole — a common occurrence in Florida — would be safe to re-enter.

The first sign of trouble came about 10:30 Sunday night. Security guard Richard Shanley had just started his shift, and he heard what sounded like shouting from a building.

A guest flagged him down to report that a window had blown out. Shanley reported it to management, and another window popped. The resort’s staff decided to evacuate the villa.

Shanley said the building seemed to sink by 10 to 20 inches and bannisters began to fall off the building as he ran up and down three floors trying to wake guests. One couple with a baby on the third floor couldn’t get their door open and had to break a window to get out, he said.

“It’s a scary situation,” Shanley said, and guests credited him with saving lives by knocking on doors to wake them. Inside, they heard what sounded like thunder and then the storm of water, as if it were a storm. Evacuation took about 10 to 15 minutes, according to staff and witnesses.