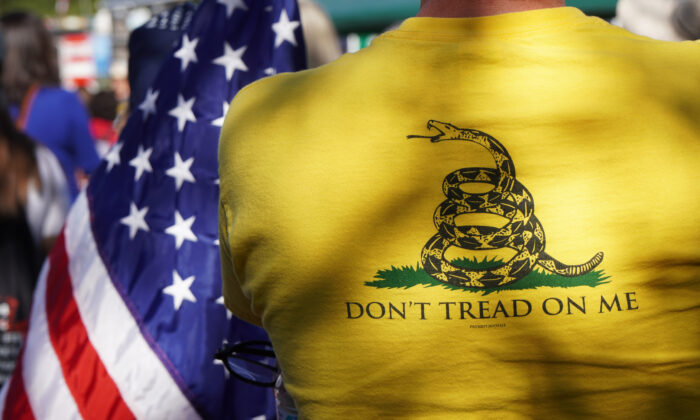 A protester wearing a “Don’t Tread on Me” Gadsden Flag T-shirt listens to a speaker at a rally in support of medical freedom in Phoenix, Ariz., on Nov. 3, 2021. (Allan Stein/Epoch Times)
US

Florida Rolling Out ‘Don’t Tread on Me’ License Plate

The governor announced that the Gadsden flag specialty plates were in “pre-order” status, with the Florida Veterans Foundation, a veterans’ advocacy group, to receive $25 per plate.

“The free state of Florida has a new license plate for pre-order that benefits the Florida Veterans Foundation and sends a clear message to out-of-state cars, ‘Don’t Tread on Me’ or Florida,” DeSantis wrote on Twitter on July 30. “Visit your local tax collector to purchase your presale voucher.”

“‘Love, love, love’ Florida Gov. DeSantis’s new license plate; ‘Don’t Tread on Me!'” one Twitter user said. “This is how we feel about our great country. That is right now being systematically destroyed by the radical Left.”

The Gadsden flag, depicting a coiled rattlesnake against a yellow background, dates back to Revolutionary times as a symbol of rebellion against government tyranny. More recently, for many it has come to symbolize a far-right ideology and the “Stop the Steal” movement contesting the results of the 2020 presidential election.

According to the leaked document, the Gadsden flag has become synonymous with anti-government, anti-authority violent extremists and Militia Violent Extremists (MVEs).

“MVEs justify their existence with the Second Amendment due to the mention of a ‘well-regulated Militia,’ as well as the right to bear arms,” the FBI internal guide said.

However, after the information became public, the FBI’s National Press Office, which normally declines to comment on leaked documents, issued a press release saying, “we would point out an online article referencing an allegedly leaked document on symbols that may be used by Militia Violent Extremists (MVE) contains the following words highlighted in bold near the top of the document: The use or sharing of these symbols alone should not independently be considered evidence of MVE presence or affiliation or serve as an indicator of illegal activity, as many individuals use these symbols for their original, historic meaning, or other non-violent purposes.”

Not everyone welcomes the new license plate for Florida. On the governor’s Twitter feed,  some compared it to the Confederate “stars and bars” and said the “Free State of Florida is not Free at all,” apparently in a reference to legislation that bans critical race theory in schools and the workplace, as well as the parental rights in education bill that DeSantis signed earlier this year.

The Gadsden flag can be traced back to 1775 around the same time as the Boston Tea Party when the Continental Congress commissioned some privateers with the Marines stationed on the ships and the South Carolina delegate to Congress, Christopher Gadsden to design the flag, according to the book “Founding Brothers: The Revolutionary Generation,” by Joseph Ellis, an American history professor at Mount Holyoke College in Massachusetts.

The original design had a coiled rattlesnake on a yellow background with the words ‘don’t tread on me’ beneath it. The flag’s design has become the seal of the U.S. Marine Corps, the book says..

“Then came the Tea Party movement,” which adopted the banner in 2010 that symbolized their antipathy toward the government. Ellis wrote. “Since then, it has gone on to become a symbol for anti-government groups and individuals.”

DeSantis previously said a minimum threshold of 3,000 plates must be pre-ordered before the state will start producing them. Currently, 1,800 have been pre-ordered, according to the Florida Highway Safety and Motor Vehicles (FLHSMV) website.

The governor’s office could not be reached for comment before press time. In a statement released on July 30, it addressed the controversial aspects of the plate.

“The freedom-fighting spirit the flag originally symbolized has guided America to this day, and Governor DeSantis likewise believes that freedom is a worthy pursuit and viable alternative to heavy-handed government,” the statement said.

“Many Floridians celebrate Florida as the vanguard of freedom, and countless others have moved here from across the country to live under a state government that enshrines freedom in its decision-making.”