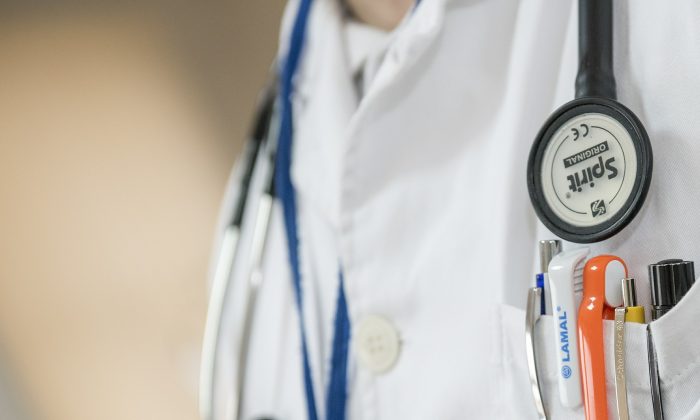 A viral video of a girl licking a tongue depressor at a medical clinic landed her mother in jail, it was reported.

The report said that she recorded a video of her daughter licking the item and putting it back amid viral videos of people licking ice cream and placing the products back on the shelf.

Remember that viral video of the girl licking a tongue depressor at a local clinic and putting it back? Now, her mother has been arrested. https://t.co/fhbxjKTCYu

The All About Kids & Families Medical Center clinic in Jacksonville called the police to investigate after the video went viral.

Ward told the station that she shot the video and posted it on Snapchat.

“I had just been waiting a long time,” said Ward. “I was just being silly with my kids.”

“It’s ruined my life right now. That’s how I feel at least,” she added.

The dentist’s office said the items in the room were removed and resanitized.

“This type of behavior is not tolerated at All About Kids and Families Medical Center. Each year, we serve thousands of patients, and providing quality care and ensuring their safety is our top priority,” the office said.

“We were notified yesterday that a patient violated our trust with behavior that is inconsistent with the practices and standards that we uphold and expect at our facility,” reads a statement, reported Fox News. “Upon notification of this isolated incident, we contacted law enforcement to request a full and thorough investigation. In addition, we immediately removed all materials and container from the specific exam room and re-sanitized our entire facility. Our internal investigation does not reveal any resulting risks or harm to patients from this action.”

Yesterday I received a statement from the doctor’s office where the incident happened saying staff was requesting a full law enforcement investigation. I’m reaching out to the office again for their reaction to Ward’s arrest @ActionNewsJax @WOKVNews pic.twitter.com/unhZT2UYPN

“I mean honestly, I wasn’t thinking,” Ward told Action News Jax while adding that video doesn’t tell the entire story. She claimed to have disposed of the depressor and “removed the items that were even surrounding it.”

Ward claimed that she knew nothing about the viral ice cream videos. She said, “I know what it’s like to, you know, have to worry about your kids health and stuff. I would never put somebody else’s kid at risk.”

“It’s horrible. I mean, I’m scared for my kids, especially, my oldest that’s out and on her own since they posted her photo,” she said.

Dr. Sunil Joshi told the station that the actions seen in viral videos could have serious health consequences.