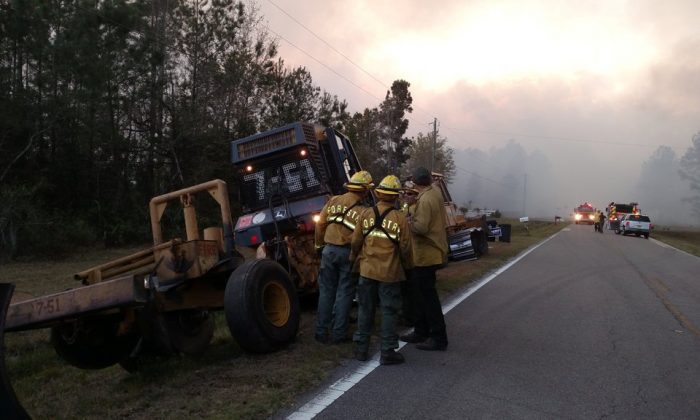 Firefighters and firefighting equipment arrive to deal with wildfire that quickly spread across acres of land, damaging many homes and forcing residents to evacuate in Nassau County, Fla., U.S. on March 22, 2017. (Courtesy Florida Forest Service/Handout via REUTERS)
Crime and Incidents

A Florida man’s illegal burning of paperback books sparked a wildfire that quickly spread across 400 acres of land, damaging or destroying as many as 15 homes and forcing residents to evacuate in the northeastern part of the state, officials said on Thursday.

The blaze started on Wednesday afternoon after the unidentified man burned books and magazines outside his home near Bryceville, about 20 miles west of Jacksonville, Florida Forest Service spokeswoman Annaleasa Winter told Reuters by telephone.

It is against Florida law to burn household garbage.

Dusty winds blew paper away from the initial burn site, Winter said. Firefighters initially were able to contain about five acres of flames, but strong winds caused the inferno to spiral out of control.

“What happened next was we had 40 to 50 miles-per-hour gusts of winds, and it pushed the embers right outside of the fire line and it just ran through a very dense forest and threatened many homes,” Winter said. “At least two homes are lost.”

The man accused of starting the fire was cited for an illegal burn but not charged with a crime, she said.

“This was not malicious,” Winter said. “But he will be liable for the cost of fighting the fire and any damage done.”

More than 170 emergency workers fought the flames throughout the night. By early Thursday, the fire was about 65 percent contained and no longer spreading, Forest Service officials said.

A video the agency posted on Twitter showed flames burning through dense stands of trees and thick clouds of smoke as bulldozers plowed through debris.

Up to 200 residents were asked to evacuate their homes and stay at nearby shelters. A few minor injuries to emergency workers were reported, Winter said.