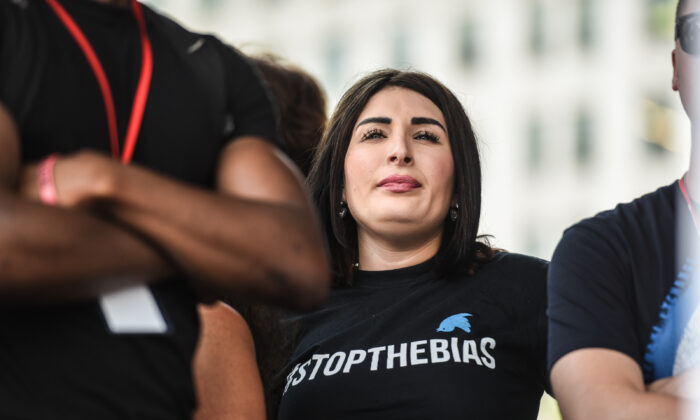 Laura Loomer waits backstage during a "Demand Free Speech" rally on Freedom Plaza on July 6, 2019, in Washington. The demonstrators are calling for an end of censorship by social media companies. (Stephanie Keith/Getty Images)
By Zachary Stieber

Laura Loomer, who is running for a U.S. House seat in Florida, has outraised incumbent Rep. Lois Frankel (D-Fla.) in the third quarter.

Loomer’s candidacy has attracted attention outside of the state because she’s one of a growing number of people who have been banned from multiple platforms, such as Twitter and Paypal, an effort by big tech companies that has brought increasing criticism from federal lawmakers and officials, including President Donald Trump.

Federal Election Commission records show Loomer raised $154,311 in the third quarter, despite being without a platform on major social media websites.

Loomer, 26, a political activist and journalist, announced her run for Frankel’s seat on Aug. 2.

The fundraising total indicates Loomer is the top Republican candidate in the race. Michael Bluemling, Jr., a combat veteran, came in second in fundraising on the GOP side but managed just $20,937.

Loomer has previously attracted attention for a variety of stunts and confrontations, including bringing men she said were illegal aliens onto the California property of House Speaker Nancy Pelosi (D-Calif.). Loomer also confronted Rep. Ilhan Omar (D-Minn.) over accusations that the Somalian immigrant married her brother for immigration fraud purposes.

In a statement, Loomer said she was humbled by the contributions.

“I’m humbled at the outpouring of support for my campaign,” said Loomer. “Despite the radical left, big tech tyrants and the fake-news media doing everything they can to hinder my campaign, this early showing puts career politician Lois Frankel and the do-nothing-Democrats in Congress on notice that no seat is safe and that I’m running to win.”

“I believe this will be one of the most watched congressional races for 2020 and will be a bellweather for regaining the House,” Giorno said.

While not mentioning Loomer by name, President Donald Trump has regularly criticized the censorship of conservatives on Facebook, Twitter, and other platforms.

In May, shortly after Loomer and InfoWars founder Alex Jones, among others, were banned by Facebook, he wrote that he is monitoring “the censorship of AMERICAN CITIZENS on social media platforms.”