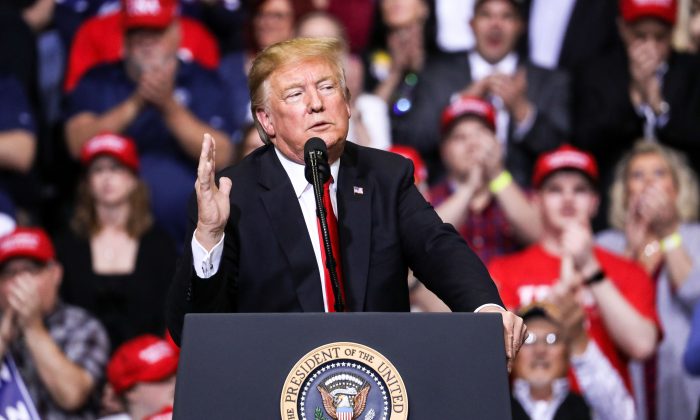 President Donald Trump came to the defense of popular conservative commentators who have been censored by tech companies in a series of 13 tweets and retweets between May 3 and May 4 after Facebook banned several influential figures from its social media platforms the previous day.

Trump warned that he is monitoring “the censorship of AMERICAN CITIZENS on social media platforms.”

He also reposted commentary on the alleged censorship from several prominent right-wing figures, including The Daily Wire Executive Producer Jeremy Boreing, journalist and activist Lauren Southern, and commentator Paul Joseph Watson—who were among those purged by Facebook.

Woods, a Hollywood actor and producer who is politically vocal on Twitter, discovered his account was suspended over a tweet of his that advocated for the death penalty for those who commit treason.

“‘If you try to kill the King, you better not miss.’ #HangThemAll,” he said, adopting a quote from 19th-century American poet and philosopher Ralph Waldo Emerson.

It appears Woods was referring to those who are allegedly trying to remove Trump from office using unsubstantiated allegations that the president colluded with Russia.

“How can it be possible that James Woods (and many others), a strong but responsible Conservative Voice, is banned from Twitter?” Trump said in another tweet. “Social Media & Fake News Media, together with their partner, the Democrat Party, have no idea the problems they are causing for themselves. VERY UNFAIR!”

Trump repeatedly has accused social media companies of having a bias against conservatives. While Silicon Valley’s workforce is known to lean overwhelmingly left, the companies have denied the workers’ political biases seep into their content policing.

However, there is mounting evidence to the contrary. The companies’ intensifying focus on banning “hate speech” is itself a partisan position, based on the 2017 Cato survey (pdf), which showed that Democrats were much more likely to call a variety of statements “hateful,” while Republicans were more likely to call them “offensive, but not hateful.”

Facebook said on May 2 that it was banning InfoWars founder Alex Jones, right-wing speaker Milo Yiannopoulos, conservative journalist and activist Laura Loomer, InfoWars contributor Watson, and a few others for violating the social media company’s policies on “dangerous individuals and organizations.”

Facebook said it will remove any accounts, pages, groups and events associated with the banned individuals, both on its core social network and its photo-sharing app, Instagram. It says it bans any users who it deems are promoting “violence” or “hate.”

In a video response, which was shared by Trump, Watson took issue with being labeled “dangerous,” pointing out that Facebook has been using this label to describe individuals and groups involved in terrorism, mass or serial murder, organized crime, human trafficking, and “organized hate.”

Watson is a chief reporter at InfoWars who, in recent years, has focused on critiquing postmodernist culture. Videos on his YouTube channel have been viewed more than 380 million times.

“The support for me has been incredible,” he said in a May 4 tweet shared by the president. “This could actually lead to some genuine change. Keep up the pressure. Don’t let it rest.”

Jones, a longtime radio host, has faced frequent criticism for making controversial, sometimes unverified, claims and for his hot-tempered outbursts.

“So great to watch this!” Trump said.

A Facebook spokesperson explained that part of the reason Jones, Yiannopoulos, Loomer, and Watson were banned was that they interviewed or publicly praised Gavin McInnes, Tommy Robinson, and/or Faith Goldy—all previously labeled as “dangerous” by Facebook.

Facebook Community Standards prohibit content that “supports” individuals and groups marked “dangerous,” but there seems to be no written policy to ban accounts of people who express such support.

The spokesperson also indicated that even people who don’t call for violence or engage in “organized hate” can be labeled “dangerous” and banned by Facebook, but didn’t explain what part of the Community Standards informs users of such a risk or how to avoid it. Facebook looks at different indicators, the spokesperson said, including activity on Facebook and in real life, to make the determinations.

One example the spokesperson gave was that violence occurring at an event organized by a certain group may be part of the reason for labeling the group “dangerous.” It wasn’t clear whether the group necessarily needs to initiate the violence. Content posted on Facebook in violation of the platform’s policies in general may also contribute to the “dangerous” label. The spokesperson, however, made it clear there could be other unspecified indicators playing a role too.

Facebook doesn’t want to reveal all the indicators it uses so as to prevent people from circumventing the rules, the spokesperson said.

McInnes, co-founder of Vice magazine, is a comedian and the founder of the somewhat satirical Proud Boys men’s club that describes itself as “Western chauvinists,” a term coined by McInnes to mean “a proud and unabashed proponent of Western Civilization.”

Some of its members go to right-wing rallies and events to “do free security for conservative speakers,” its website says. Some members have been involved in fights with members of violent leftist groups such as Antifa. McInnes previously said Proud Boys have a rule to not start a fight, but to “finish it.”

Robinson is a British activist advocating for UK sovereignty, lower immigration, and against Islam. In 2018, he was jailed for 13 months over alleged contempt of court for live-streaming outside an ongoing court case involving accused Muslim child-rape gangs. He was released on bail after an appeal judge decided the original judgment was “flawed.” Authorities then ordered a new trial.

Goldy is a Canadian activist and journalist advocating for nationalism (as opposed to globalism) and lower immigration.

Among those Facebook said it was going to ban were also Paul Nehlen and Louis Farrakhan.

Nehlen is a failed Wisconsin congressional candidate who previously was banned from Twitter after he posted a picture of Duchess of Sussex Meghan Markle, who is half black, with her face replaced with a dark-skinned face rendered based on the genetic profile of the 11,000-year-old so-called Cheddar Man skeleton found in England.

He said he was making light of an article that purportedly claimed that “whites never existed.” In fact, the Cheddar Man rendering suggested that light or dark skin doesn’t necessarily determine one’s genetic race, Quartz reported.

Nehlen was shunned by mainstream conservatives after he made negative comments about Jews, including an opinion that “American Jews” were the driving force behind U.S. involvement in Middle East wars, which, he said, “have been fought for Israel.”

He later was kicked off the pro-free speech Gab platform after he posted personal information—so-called doxxing—of another user, which is banned on Gab.

Farrakhan is a Nation of Islam leader, who has preached black separatism and has frequently made anti-Semitic remarks, including referring to Jews as “termites.”

Update: The article has been updated with further information provided by a Facebook spokesperson.