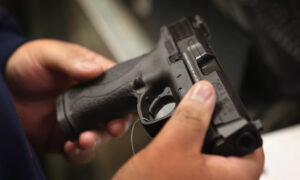 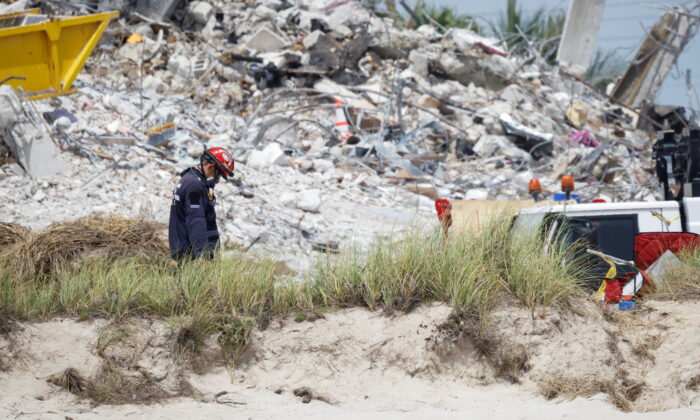 A rescue worker is seen as search-and-rescue efforts resume at Champlain Towers South complex in Surfside, Fla., on July 5, 2021. (Marco Bello/Reuters)
US News

The confirmed death toll in the collapse of a Miami-area condominium tower increased to 78 on Friday after workers recovered an additional 14 bodies and whittled the rubble down close to ground level, officials said.

A total of 62 people remain missing and feared dead in the concrete and steel ruins of the 12-story building in the oceanfront town of Surfside, Miami-Dade County Mayor Daniella Levine Cava told a news conference.

The number of missing could change as it remains possible that not all were in the building when it abruptly crumbled to the ground in the early hours of June 24. Officials have yet to determine the cause of the disaster.

“This is a staggering and heartbreaking number that affects all of us very deeply,” Levine Cava told a briefing, adding that 13 million pounds of debris had been removed from the site in the past two weeks of round-the-clock work.

Surfside Mayor Charles Burkett said crews have cut the size of the building debris pile from four or five stories to nearly ground level, with some areas at below-ground level.

“So the progress that our search and rescue teams are making is really incredible,” Burkett said.

Investigators have not determined what caused the Champlain Towers South to fall apart without warning. Attention has been focused on a 2018 engineering report that warned of structural deficiencies.

The recovery effort has taken a toll on search crews, as a laceration and a “cardiac in nature” episode prompted two members to be taken to a hospital where they were in stable condition, Miami-Dade Fire Chief Alan Cominsky said.

In addition, a police officer was taken to a hospital after his foot was run over by a truck, Miami-Dade Police Director Alfredo “Freddy” Ramirez said. “He’s just frustrated that he can’t be here to contribute,” Ramirez added.