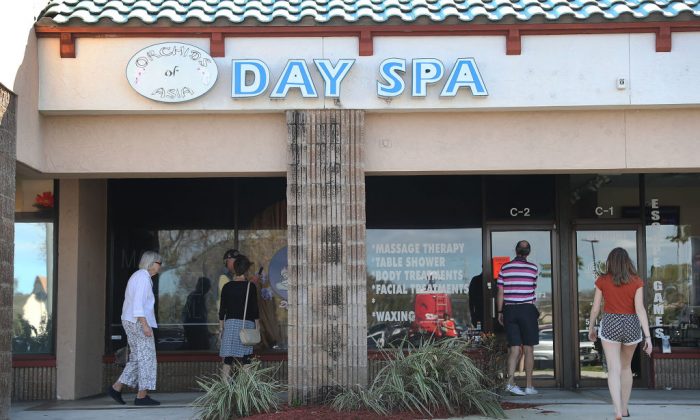 People mill around in front of the Orchids of Asia Day Spa in Jupiter, Florida, on Feb. 22, 2019. The former owner of the spa was recently revealed to have sought out opportunities to network with Republican Party politicians. (Joe Raedle/Getty Images)
Chinese Regime

Yang Li, a Chinese massage parlor owner in Florida who has recently gained attention for her attempts to get access to President Donald Trump and elite members of the Republican Party, is now revealed to have connections to the Chinese Communist Party.

Yang, who also goes by the name Cindy, came under scrutiny after a Miami Herald report revealed that the Florida spa where New England Patriots owner Robert Kraft allegedly solicited prostitution was founded and previously owned by her.

The Orchids of Asia Day Spa, where Kraft was busted, was part of a human-trafficking investigation across multiple Florida counties.

A look into her history reveals her ties to the Chinese regime.

An online article published on WeChat, a popular social media platform, in February 2017 first publicized that, in 2016, she became the deputy president of the Florida branch of the Council for the Promotion of the Peaceful Reunification of China (CPPRC)—a Beijing front group.

The CPPRC is “directly subordinate” to the Chinese Communist Party’s (CCP) United Front Work Department, which is a “high-level Party body that reports directly to the CCP’s Central Committee,” according to a report published by the U.S.-China Economic and Security Review Commission in August 2018. The Central Committee comprises 200-plus members of the Party elite.

According to the USCC report, the CPPRC has at least 200 chapters in 90 countries, including 33 chapters in the United States registered as the National Association for China’s Peaceful Unification.

In 2016, Yang was also made deputy chairman of the Miami chapter of the Chinese Association of Science and Technology (CAST), as clearly indicated in an article published on the organization’s website in September 2016.

CAST isn’t a typical trade association. According to the English version of its website, CAST, which has branches around China and in different countries, “serves as a bridge that links the Communist Party of China and the Chinese government to the country’s [China] science and technology community.”

There are also other signs of Yang’s connections to top-level Chinese officials.

Soon after arriving in the United States for studies in 1999, Yang took up a job as a journalist for Ding Ding Television, a Chinese-language broadcaster based in Silicon Valley. In an October 2015 photo, she was seen interviewing Li Qiangmin, China’s consul general in Houston, at an event held at Florida International University, according to a separate Miami Herald article.

Schmoozing with The GOP

After Trump was elected, Yang became active among Republican Party circles, often appearing at charity events and political fundraisers along the East Coast, according to the Miami Herald.

The Florida newspaper uncovered photos of her socializing with Republican officials, such as Sen. Rick Scott (R-Fla.) at the politician’s Sunshine Ball—which raised money for a political action committee—in Washington, in January. Donors paid $25,000 for a photo opportunity with the senator.

Most recently, on Feb. 3, Yang posted a photo on Facebook of her and Trump at a Super Bowl watch party, hosted at Trump’s West Palm Beach country club in Florida.

Yang also made considerable political donations to the Trump campaign. Since 2017, she and her close relatives have contributed more than $42,000 to Trump Victory, a political action committee, and more than $16,000 to the president’s reelection campaign, according to the Miami Herald.

According to South China Morning Post, Yang was recently appointed director of community engagement for the National Committee of Asian American Republicans–Florida branch.

But after the Miami Herald story was published, the committee dismissed her on March 8.

It appears that Yang had been trying to capitalize on her political exploits. According to a March 9 article by Mother Jones magazine, she founded a company called GY US Investment LLC in 2017.

On its website, the company bills itself as an “international business consulting firm that provides public relations services to assist businesses in America to establish and expand their brand image in the modern Chinese marketplace.” The website has been down since the Miami Herald story broke.

The company offered client activities, such as interacting with U.S. politicians, and suggested that the firm could set up opportunities to dine at the White House and on Capitol Hill.