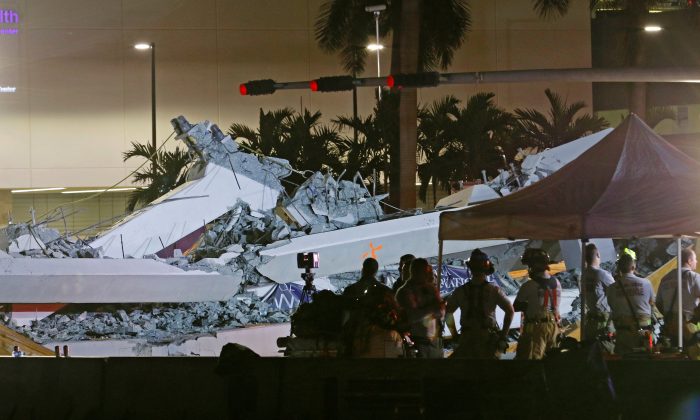 Six people have been confirmed killed when a newly erected pedestrian bridge collapsed at Florida International University’s Miami campus, but the number of fatalities is expected to grow as crews work to free those still trapped, authorities say.

The 950-ton bridge, which spanned several lanes of traffic, came crashing down on Thursday, March 15, burying at least eight vehicles in rubble.

“There must be some others in the vehicles,” Perez told Miami’s NewsRadio 610 WIOD early on Friday, according to Reuters. “We know there’s bodies down there and we can’t get to them. It’s terrible.”

The mission has been reclassified from a rescue to a recovery effort, ABC news reported, as authorities said anyone still trapped under the wreckage is likely dead.

“The engineers are working at it in a very tactical way,” Alvaro Zabaleta, a spokesman for the Miami-Dade Police Department, said at a news conference Friday, according to ABC.

“The structure is fragile and could be dangerous to rescue personnel.”

Earlier emergency personnel with sniffer dogs searched for signs of life amid the wreckage of concrete and twisted metal that rained from the collapsed structure and crushed vehicles on one of the busiest roads in South Florida.

But police determined late on Thursday that nobody would be pulled from the wreckage alive, Perez said at a news briefing on Friday.

The identities of the victims are not yet known, but at least one was a female student at Florida International University, the university’s president, Mark Rosenberg, told reporters.

At least 10 people were taken to hospitals and two were in critical condition, officials and local media reported.

The 174-foot (53-meter) bridge connects the university with the city of Sweetwater and was installed on Saturday in six hours over the eight-lane highway, according to a report posted on the university’s website.

“If anybody has done anything wrong, we will hold them accountable,” Florida Governor Rick Scott said at a news briefing late Thursday.

FIU President Mark Rosenberg said today on “Good Morning America” that the “project has been done as every other project at FIU in terms of construction. … We only work with certified contractors that have been approved by all the appropriate authorities.”

“We’re shocked and we’re going to cooperate fully,” Rosenberg said, according to ABC. “We’ve got to get to the bottom of this and we will.”

“Our condolences to all the family members and loved ones to those who were injured and killed in this tragic accident.”

The governor’s office earlier issued a statement saying a company contracted to inspect the bridge was not pre-qualified by the state.

Munilla Construction Management, which installed the bridge, was founded in 1983 and is owned by five brothers, according to its website. In addition to its Florida operations, the company also has divisions in Texas and Panama and employs 500 people.

FIGG Engineering said it took part in the bridge project and would fully cooperate with investigators, adding that the collapse was the first in its 40-year history.

The bridge was intended to provide a walkway over the busy street, where an 18-year-old female FIU student from San Diego was killed as she attempted to cross in August, according to local media reports.