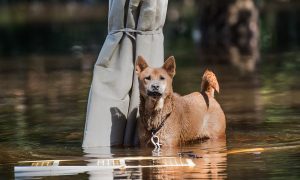 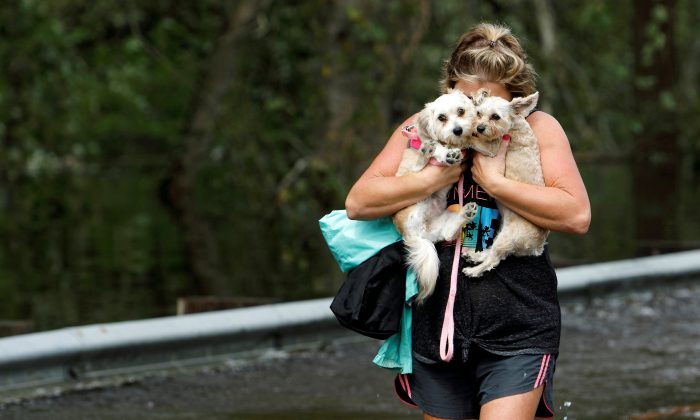 Lisa Shackleford hugs her pet dogs Izzy (L) and Bella as she wades through flood waters to safety while the Northeast Cape Fear River breaks its banks in the aftermath Hurricane Florence in Burgaw, North Carolina, U.S., September 17, 2018. (Reuters/Jonathan Drake)
US News

Owners who leave their dogs tied up during a hurricane could face a year in jail or a $5,000 fine under new legislation making its way through the Florida senate.

The bill, which considers tethering dogs during a storm to be an act of animal cruelty—and a first class misdemeanor—would become law in the summer, if it passes.

Sponsor Joe Gruters, R-Sarasota, said the proposal (Senate Bill 1738), is trying to resolve the kinds of problems they saw during hurricanes Matthew, Irma and Michael.

“We’ve seen these three hurricanes and seen numerous dogs left tethered to different things,” Gruters said, according to the Tampa Bay Times. “We want to give dogs a fighting chance.”

Under the proposal, which has already cleared the Senate Agriculture Committee, the owners would be punished if they were given notice of a weather event but use “a chain, rope, tether, leash, cable, or other device that attaches a dog to a stationary object or trolley system.”

The bill is currently under review by the state senate and if passed will take effect on July 1, 2019, in time for next year’s hurricane season.

After hurricane Irma, stories of dozens of dogs left tethered and abandoned across the state left many people outraged, with authorities in some areas unable to prosecute under current legislation.

In some Florida counties, such as Palm Beach County, however, it is already a crime to tether animals during extreme whether or to leave them tethered without an owner present.

But while some owners left their pets behind, other kind-hearted animal lovers went out of their way to rescue animals left to fend for themselves in the flooding and winds.

In October last year, a woman who traveled to Wilmington, North Carolina, to save her car from Hurricane Florence’s fury decided to turn her drive back into an animal rescue mission.

According to Liz Jones, founder of the Sanctuary at Haafsville in Breinigsville, Pennsylvania, not long before Hurricane Florence made landfall near Wilmington and began its onslaught, an unnamed woman flew in to pick up her car before the anticipated flood.

But instead of driving back empty, the woman stopped off at an animal shelter and carried out a load of animals that might otherwise have been euthanized.

“She thought why should I drive north with an empty vehicle … so she stopped at the Humane Society and said who can I save,” said Jones.

Wilmington was one of the first areas hit as storm-driven floodwaters surged inland and screaming winds lashed everything in sight.

The Pennsylvania sanctuary also welcomed eight dogs and close to a dozen cats last night after a ten-hour trek from a North Carolina shelter.

“A lot of the shelters are in flood zones, so if they were faced if they didn’t get them out, they may have had to make the hard choice to euthanize them,” Jones said.

Jones said she had heard multiple reports of animals being left stranded as their owners fled.

“I was just on the phone with a woman who is setting up a 3,000 square foot rescue area for animals. She said it’s just chaos. Animals are just being left on the side of the road,” said Jones.